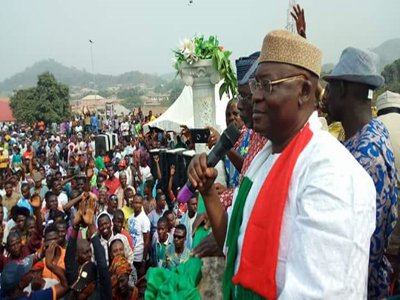 Ado-Ekiti, the capital of Ekiti State yesterday experience a lock down as large numbers of people troop out to support a former Minister of State for Works, Prince Dayo Adeyeye, who declared his intention to vie for the governorship seat.

The Event was mounted with heavy security presence to prevent a breakdown of law and order.

Adeyeye, who has shown interest to run on the platform of the Peoples Democratic Party (PDP), condemned alleged attempts by the state government to stop the declaration.

He accused Governor Ayo Fayose’s administration of ordering some television stations not to cover the event.

Adeyeye’s campaign office at Coca-Cola area of Ikere Road and the open field on the opposite side, where the declaration was held, were cordoned off with heavy security presence.

A police armoured personnel carrier, two vehicles belonging to security agencies and battle-ready armed policemen were on the ground to avert likely breakdown of law and order.

There was a massive lockdown on the busy Ado-Ikere roas as Adeyeye’s supporters resorted to trekking to the declaration venue.

The former PDP national spokesman said he was joining the governorship race to give good governance to Ekiti residents and make life better for them.

Adeyeye, who was joined by his wife, Adetomilola, accused the Fayose administration of inflicting hardship on the people.

He promised not owe civil servants, teachers, local government workers and pensioners, as being witnessed in the state.

The governorship hopeful promised to repair Ekiti, which he said had been damaged by bad governance.

Adeyeye said he would invest in agriculture, create jobs and give economic empowerment to the people.

He urged Ekiti residents, who are yet to collect their Permanent Voter Cards (PVCs) to do so to enable the exercise their franchise on Election Day. 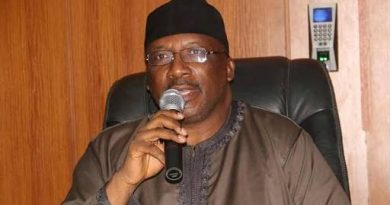