HomeTHE NATIONA Young Man killed by Gang For Refusing Them From Seeing His...
THE NATION 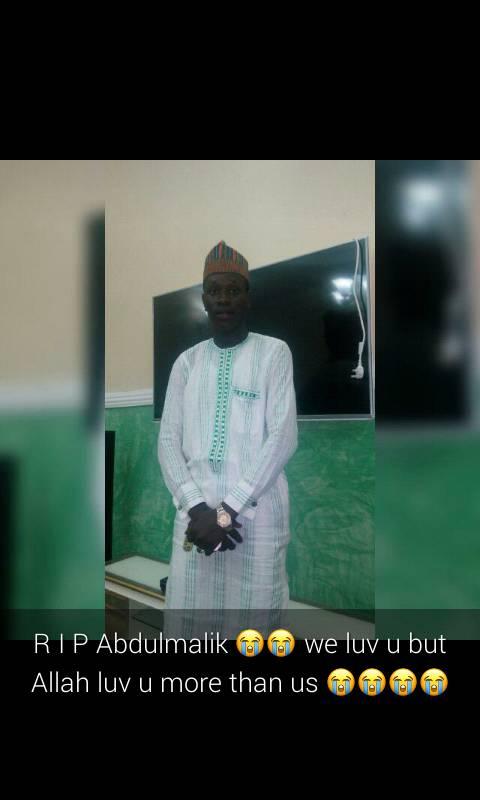 young man known as Abdulmalik Kabir Yaro who recently lost his brother to cancer about 4-weeks ago has been beaten to death by gang members in Katsina State.

Narrating the sad events, Facebook user Maiwada Dammallam shared details of his death and events that led to it:

This is Abdulmalik Kabir Yaro, a wonderful son of my friend from childhood. Abdulmalik lost his younger brother to leukemia about 4 weeks ago. This morning he’s dead, killed (read, executed) by a local gang. Abdulmalik’s offense which earned him death sentence in the court of this gang was his effort to stop the wayward gang from seeing his young sister who’s barely the age of courtship.

The gang somehow cornered Abdulmalik and beat him up to pulp yesterday. He was rushed to the hospital in coma and gave up the ghost today around 11 am. This is not in Katsina, Kano, Lagos or Port Harcourt, this happened in the heart of Malumfashi, my sweet serene hometown. I’m devastated!

That the victim was my son while my hometown was the theatre of this ungodly violence, made it even more disturbing. That it’s another crime induced by passion and possibly drugs when Nigeria is debating yesterday’s callous murder of a young man by his wife in a case of domestic violence made it even more tragic and cause for concern.

Where are we heading? Why is murder becoming a cheap option for conflict resolution? What’s missing in the system that people don’t seem afraid to commit grievous offenses that hitherto, we watched only in western movies? We are slowly inching towards a lawless society for lack of willingness to implement our punitive laws scripted to curtail and control criminality. Most laws in Nigeria are mere decoration; made ineffective by our cumbersome judicial system. I’m sure the murderous of Abdulmalik would have had a second thought before his murder had they watched a convicted murderer hanged to death for his offense. Sadly, all they have to stimulate their respect for the law were countless stories of murderers getting away with murders due to a mixture of clumsiness and cunningness of our judicial system.

It’s sad that a cry for justice in Nigeria is a cry that only the victim could hear. Our courts are more like a sanctuary for criminals than for their victims. With money, one could get away with almost any crime imaginable under the sun. Good cases were lost to judicial technicalities that have no relevance to the facts of the case. Only in Nigeria would a criminal like Evans who made billions in ransom from his kidnapped victims (some of whom were killed by him anyway) would battle the court to enforce his “human right”. It should make sense that people are resorting to improvised laws to deal with criminality.

Thanks to the inefficacy of our justice system, individual communities have designed laws that are already being implemented in full to dispense speedy justice. Thieves of all grades and categories are roasted by the roadside to circumvent the cumbersomeness of our justice system in most states in the Southern part of the country. It’s only a matter of time before other parts of the country borrow and tailor the system to suit their needs. The only antidote for such likely crisis is a wholistic review of the justice system to make more compliant and user friendly.

My heartfelt condolence to the parents of Abdulmalik for tragic lost of a promising son when in yet to overcome the pain of an earlier. Allah ya jikanshi da rahama.