HomeLIFESTYLEMeet Man Who Killed A 14 Year Old Girl And Took her...
LIFESTYLETHE NATION 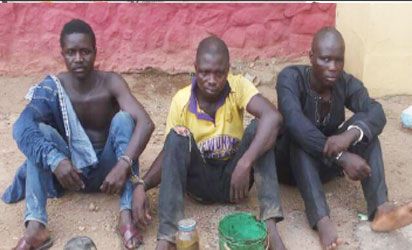 ABEOKUTA—35-year-old suspected ritualist, Yewunu Tanlaju, who suspectedly killed a 17-year-old girl, Taye Gusinu, said, that he collected N8,500 in exchange for the girl’s head, intestines and two hands of the victim.
This is following as the victim’s father has said the law must be allowed to give him justice, otherwise he will apply jungle justice if they are released by the Police.

The state’s Commissioner of Police, Ahmed Iliyasu, who paraded the three suspects at the Police Headquarters, Eleweran, Abeokuta, in connection with the killing of the 17-year-old girl, also paraded some suspected criminals arrested for various crimes across the state. The suspect said he lured the victim, who hawked puff-puff (doughnut) by buying N40 worth of the goods from the victim, before he killed her and removed some parts of the body.