HomeNEWSMore than N1.3trn has been stolen in four years by 32 people...
NEWSTHE NATION

More than N1.3trn has been stolen in four years by 32 people – EFCC Acting Chairman, Ibrahim Magu 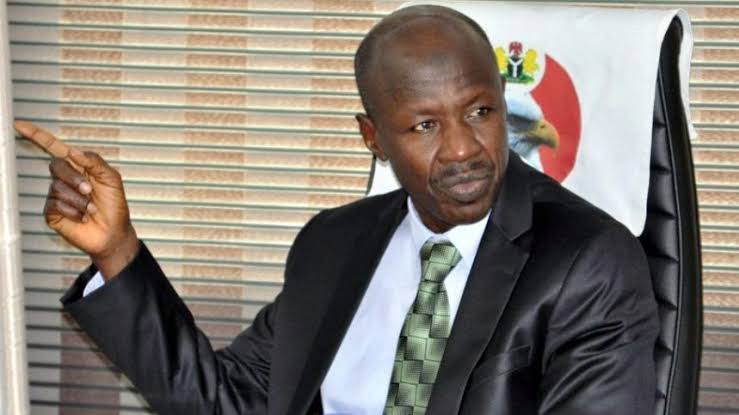 It has been disclosed by the Acting Chairman of the Economic and Financial Crimes Commission, EFCC, Ibrahim Magu that the money stolen by 32 entities (human and corporate) between 2011 and 2015, is over N1.3 trillion.

Magu disclosed this in his keynote address at the opening ceremony of the 2019 First Batch Conversion Training Programme to Procurement Cadre for Federal Parastatal and Agencies, organised by the Bureau of Public Procurement, BPP, in Lagos on Monday, March 25, 2019.

Magu, in a paper delivered on his behalf by the Commission’s Secretary, Ola Olukoyede decried this huge financial loss on the country, and noted that “one third of this money, using world bank rates and cost, could have comfortably been used to construct well over 500km of roads; build close to 200 schools; educate about 4000 children from primary to tertiary levels at N25million per child; build 20,000 units of two-bedroom houses across the country and do even more.

“The cost of this grand theft, therefore, is that these roads, schools and houses will never be built and these children will never have access to quality education because a few rapacious individuals had cornered for themselves what would have helped secure the lives of the future generations, thereby depriving them of quality education and healthcare, among others.”

He stated that the poor state of procurement process in Nigeria was one of the major reasons why corruption has continued to thrive in government agencies and parastatals. The EFCC boss further noted that the training, organised by the BPP was aimed at giving the participants the tools, knowledge and understanding they would need to carry out their duties in their respective places of primary assignments in an efficient and transparent manner.

“I sincerely hope that at the end of this training, we will see a few cases of financial propriety in our procurement processes in government agencies and parastatal. Indeed, corruption could kill Nigeria, if we do not scale up our proficiency in contract and procurement management process,” Magu said.

He further observed that “the establishment of the EFCC in 2003 was because of the determination of the Federal Government to combat fraudulent activities of some Nigerians and foreigners, mismanagement in the economic sector, corruption by public officials and lack of accountability and transparency in government dealings.”

He identified some of the fraudulent practices in procurement processes in Nigeria to include: kickbacks, conflict of interests, fraud in the bidding process, bid suppression, collusive bidding, bid rotation and market division. Others according to him are: co-mingling of contracts, change order abuse, cost mischarging, defective pricing, false statement and claim, phantom vendors, product substitution, unnecessary purchases and purchases for personal use or resale.

Magu expressed confidence that Nigeria still has patriotic and credible individuals who would do all within their abilities to uphold the credibility and honesty required for leadership in public offices.