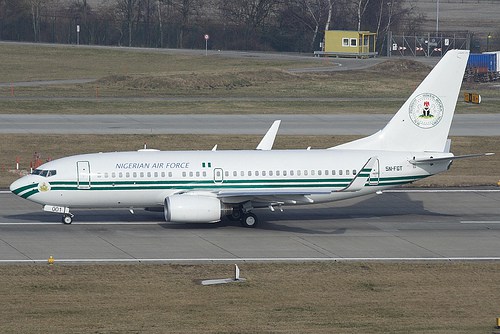 The Presidential Jet assigned to President Muhamma Buhari has taken off from the Stansted airport where it has been parked.

Some reliable sources with knowledge of the development say that the Presidential jet is confirmed to have taken off from Stansted on Tuesday evening. However it is not known if the pilots are simply engaging in activity in order to cloak the return date of the President or if indeed the President is on his way back to Nigeria after over 80 days in London for medical treatment.

Presidential spokesmen contacted by reporters denied the President had actually been airlifted from London.

It was revealed by an aide to the First Lady that Mrs Buhari would return on Wednesday, however it is unlikely that the Presidential Jet was scrambled to ferry her back to the nation’s capital.

The idle presence of the Presidential jet in London for close to three months had caused quite a stir in the country over the last two months, as many Nigerians queried why the Presidency would expend such exorbitant fund s in housing the Jet in a London airport where it would undoubtedly incur substantial charges.

The Presidency reacted to the outrage then, releasing a statement assuring Nigerians that the Jet was attracting discounted charges and that the prestige of the President warranted its presence in London.