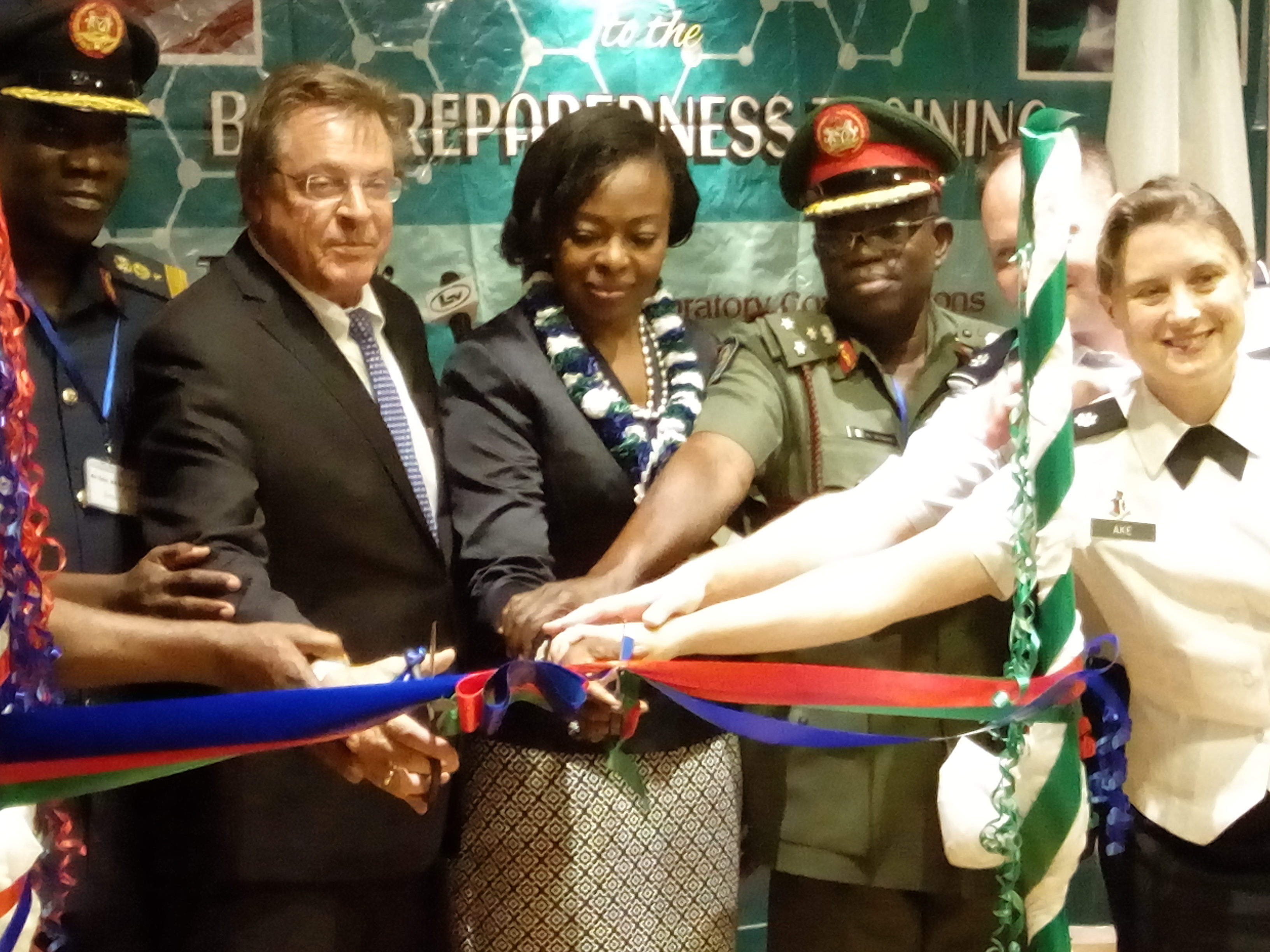 United States of America  and Nigeria, through the Ministry of Defence, have launched a collaborative effort to prevent the recurrence of epidemic diseases in West Africa.
This launching of the Joint West Africa Research Group (JWARG), took place yesterday after the MODHIP-WARP-N Biopreparedness training and research programme  at Sheraton Hotel,Ikeja Lagos.
Speaking at the event, the Permanent Secretary of Ministry of Defence, who was represented by the Director of Medical Services, Dr (Mrs) Doyin Akinlade, said the Ebola Virus Disease (EVD) outbreak of 2015 revealed the weak prevention efforts, inadequate disease detection mechanism and lack of sufficient capacity to respond to public health emergencies in the countries affected.
Akinlade stressed that the imported outbreak in Nigeria was successfully managed and contained nationwide, adding further that efforts have been made to accelerate research and development of an Ebola vaccine.
She added ” The JWARG study titled ” Severe Infectious Diseases Surveillance and Detection in West Africa” (RV 466) is to commence in 3 NMOD health facilities. The study is aimed at identifying common pathogens in West Africa that could pose public health threat”
Akinlade explained that the 3-Day bio-preparedness training is to strengthening the capacity of the participants not only in the area of research but also to be able to detect and respond appropriately and promptly to public health emergencies.
” The need to have a biocontainment facility in one of the NMOD health facilities cannot be overemphasised. It is hoped that the outcome of the bio surveillance site assessment of 68 Nigeria Army Reference hospital Yaba-Lagos will expedite necessary steps towards having a dedicated biocontainment facility in Nigeria”, said Akinlade
She concluded “It is pertinent to note that the support of the Nigeria Ministry of Defence for the Military-Military partnership that was established 12 years ago has contributed significantly to the nation’s response to some diseases of public health significance. The sustainability of this partnership through counterpart funding by the Federal Government of Nigeria makes it global model”.
Meanwhile,the United States Consul General,F John Bray, who was speaking with journalists after the programme said, “the programme is with Nigeria Government Ministry of Defence,secondly it is multilateral, it also involves the countries of Ghana,Liberia, and Nigeria”.
According to Bray, the collaboration was designed to show that the international community,Africa at large, three countries involved and the United States of America can respond effectively to the next the victim.
“The goals for the program in the next five years is to build a world class laboratory,diagnostic centres ,share medical information that can protect the next victim”,Bray said.
Recalled that Nigeria Biopreparedness Initiative ( NBI) partners have a long history of working in the region to improve health and respond to emerging pathogens.
Nigerian Ministry of Defence Health Implementation programme (NMOD/HIP) has collaborated  with U.S Walter Reed Program-Nigeria (WRP-N) on a range of infectious disease research and response in Lagos,Abuja and elsewhere.
The Military HIV Research Program (MHRP) at the Walter Reed Army Institute of Research (WARIR) is WRT-P’s parent organization and has extensive Ebola virus vaccine trial experience, as well as health program implementation success across Africa.
Share
Facebook
Twitter
Pinterest
WhatsApp
Previous articleAMBODE: LAGOS IS SET TO PRODUCE FIRST FEMALE GOVERNOR SOON | TRAIT NEWS
Next articleULC BEGINS STRIKE ON FRIDAY TO DEMAND GOOD WORKING CONDITION | TRAIT NEWS