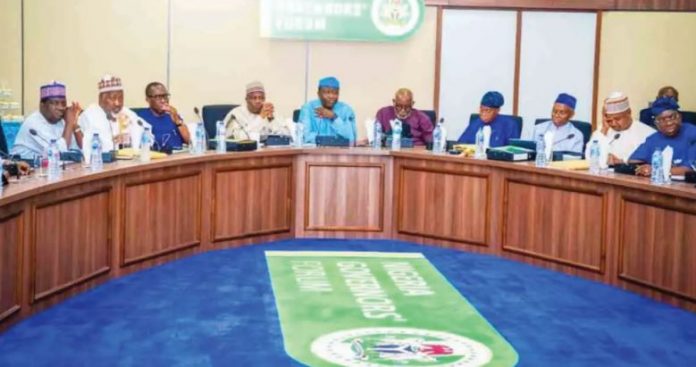 The Nigeria Governors’ Forum (NGF) on Monday said the Honourable Attorney-General of the Federation (HAGF), Abubakar Malami, was working against the public’s interest by insisting on the payment of $418 million to private consultants from the accounts of state governments.

Trait News learnt that the consultants are claiming a percentage of Paris Club refunds as payment of services they said they rendered to the states and local government.

The Federal Government had determined to pay the consultants from state accounts but a Federal High Court on Friday restrained it from making such deductions until all issues relating to that matter were fully determined.

In a statement signed by the spokesman of the Office of the Attorney-General of the Federation, Umar Gwandu, on Friday, the AGF suggested the states and local governments had acted in bad faith for taking the case to court.

The deductions were ratified by several court judgements, the AGF said, and the Federal Government only had to step in to avoid forfeiting any of its assets, since it was also a defendant in the lawsuits against the states.

But on Monday, the NGF, in a statement signed by its spokesperson Abdulrazaque Bello-Barkindo, said the AGF’s actions “raises questions of propriety and the spirit of justice.”

“The HAGF is supposed to be the chief arbiter in all matters concerning Nigerians, especially the poor masses of this country. It is incumbent upon him to, not just ensure that justice is done, but that justice is seen to have been done,” the statement said.

“The undue haste, with which the statement was issued even before the service on the AGF of the court processes and the order dated 5th November, 2021 restraining the Federal Government, seems to suggest that there is a special relationship between the Office of the AGF and the consultants over and above Nigerian citizens, whose interest the AGF as the Chief Law Officer of the Federation is statutorily bound to always protect. The statement also suggests that the restraining order issued last Friday not only unsettled preconceived plans and angered the unnamed ‘government officers’ referred to by the media aide.

“The media aide to the AGF justifies the deductions on the basis that they are made pursuant to four court judgments; two of which are consent judgments and/or that the NGF/States and LGAs consented, expressed no objection to the payments and had already paid part of the debts to the said contractors and consultants. The statement by the media aide to the HAGF however conveniently and deliberately failed to name the judgments under reference and whether they are on appeal or challenged in any other way. He also failed to specify which of the four judgments authorized payments and in what proportion to each of the contractors.

“While it is very easy to argue as the AGF does, that the NGF and ALGON took no early steps to appeal as they should have done, it is important to inform the Nigerian public that State governors have since appealed and are challenging the judgments in various courts. Interestingly the AGF has been served all these processes, nevertheless, this was ignored and payment was authorized to be made and has been processed with unprecedented speed not common in the public service. It must be stated that between the NGF and AGF, the latter is in more vantage constitutional position and has a legal responsibility and burden to defend public interest. The AGF should have therefore initiated appeals against the said judgments once his attention was drawn to them, because public interest was at stake involving huge sums of money meant for the provision of public services. It must be noted that the state governments were not parties to any of the said judgments. It should be further stated that the Office of the AGF failed to professionally defend the cases leading to those judgments and the courts commented on that unprofessional attitude.

“While we are constrained not to comment on a subject which is sub-judice, we have a responsibility to the public to respond in some detail to the statement issued by the Office of the AGF in order to put the records straight. Any discerning legal mind would find no difficulty in concluding that the so-called judgments under reference are dripping with too many irregularities bordering on competence and lack of jurisdiction which are the bases why some of them are being challenged on appeal and in other courts. No diligent public officer would act on such judgments by recommending payment.”

The NGF also noted that the AGF had recommended payments to some contractors allegedly based on judgments that did “not make any monetary award or on claims that were struck out.

“The AGF may need to explain to Nigerians why these particular judgment debts are given unusual attention and priority and processed with supersonic speed over and above all others; some of which preceded these so-called judgments and have been pending for settlement by the AGF for several years.

“While it is convenient to say that part of these judgment debts have been paid with the release of USD$86,546,526.65 and N19,439,225,871.11 in 2016 and $100m in 2018 to the contractors with the concurrence of the NGF; that does not detract from the fact that they were payments wrongly made which ought not to have been made even if they were products of consent Judgments. States can still go after the contractors to recover the funds wrongly made. It should concern the HAGF that ALGON disowned the contracts claimed by RIOK and the same was duly communicated to him requesting him to prevent the use of LG funds to ‘settle dubious and illegal claims’

“Was the AGF not concerned that several contractors are laying claim to legal fees for the same Paris Club Refund? Was it lost on the AGF on the detailed procedure available under the law how legal fees can be claimed in deserving cases?

“One of the strange payments made is that of USD$47,831,920 million to Panic Alert Security Systems Ltd/George Uboh for allegedly reviewing a 16-page judgment for the then factional NGF. Can the Office of the HAGF point to any consent judgment awarding that sum to PANIC Alert? Did the NGF’s letter of 20th January, 2020 relied upon by the HAGF ever recommend the payment of any sum?

“LINAS and NED Nwoko in this scheme are walking away with US$68,658,193.83 state funds allegedly for legal consultancy services. Is the AGF not aware that the work alleged to have been done by him was already contained in a FAAC Reconciliation Committee Report constituted in 2005 submitted in 2007 with recommendations on how states and LGAs should be refunded the over charges from the Paris Club Refunds.

“Dr. Ted Iseghohi-Edwards has been paid the sum of USD$159m in promissory notes, yet he had his matter in Suit No FCT/HC/CV/1353/18 struck out on November 10th, 2020. Furthermore, the legal basis for his claim is rooted in SUIT NO FHC/ABJ/CS/130/13: LINAS INTERNATIONAL LTD & 235 ORS V FGN which clearly stated that he cannot benefit under the judgment because he was not a party in the case and cannot enforce the terms of the judgment. Contrary to the representation of the AGF, the EFCC’s report on TED was negative. The report not only recommended his arrest but a forfeiture of any of his assets associated with the Paris Club Refund. The AGF ignored these recommendations.

“RIOK to whom the AGF supports and recommends the payment of USD$142,028,941.95 was also excluded by Justice Ademola in the Judgment in the LINAS case. This was confirmed by the Court of Appeal in Appeal No CA/558/2017. That is the appeal now before the Supreme Court (SC). Which Judgment then is the basis of the AGF recommendation that RIOK be paid the sum of $142,028,941.95. There is also no evidence of execution of any contract by RIOK. Curiously, the Department of State Security (DSS) is alleged to have confirmed 50% execution. The Court and EFCC stated clearly that it is not the responsibility of the DSS to ascertain the execution of contracts as they do not have the expertise. ALGON disowned the contracts. Why will the AGF insist on them? It is not true that the EFCC in its report recommended payment to the contractors. It did not.

“In the case of payments recommended and paid to Prince Orji Nwafor Orizu US$1,219,440.45, and Olaitan Bello – US$215,195.36, it remains a mystery. These two lawyers are alleged to have performed legal services for RIOK and its associated companies and not for the states or LGAs. Why they are paid from State resources is only imagined.

“The AGF also claims he intervened to pay the contractors to avoid execution of the judgments against the federal government resources. That is absolutely not true at all. Assets of the FGN were not at any time threatened. The NGF is not aware that there is any existing mandamus issued by any court in favour of the contractors against the Federal Government. The only application for mandamus by PANIC Alert is pending for hearing at the Federal High Court and parties have since joined issues.

“The AGF has consistently stated that this administration is an avid respecter of the rule of law. This is one case in which this commitment should be fully and completely demonstrated. Let the AGF remain neutral and protect scarce public resources. Let him advice the contractors to wait until all appeals and litigations in court are concluded. That is the true test of observing the rule of law. There is no other way, uncomfortable as that would appear. State resources needed for critical development should not under any guise be frittered away as payments for contracts whose veracity and authenticity is still a subject of litigation and disputation. These contractors are impecunious and cannot restitute the states/LGAs if the appeals or other litigation are determined against them.

“We call on the general public to be alert and vigilant. The debt relief granted Nigeria by the Paris Club in 2005 was meant to enable her have a respite and use the resources saved for meaningful development. It was not for distribution to private persons to fund their luxurious lives; neither can Nigeria justify her borrowing funds all over the world to fund capital projects and turn round to disburse state resources to individuals in a manner that offends all public sensibilities.

“We urge all those appointed as gatekeepers to our laws to ensure that the laws of our land are respected and protected. Let professionalism, reasonable caution and due diligence prevail on this matter, please.”