HomeTHE NATIONNigerians Condemn FG’s Silence on the Death of 26 Nigerian Girls on...
THE NATION 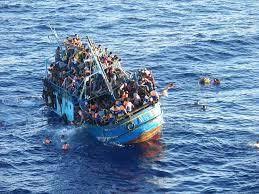 As Italian prosecutors begin investigation into the death of 26 teenage Nigerian girls who died in the Mediterranean Sea, off the coast of Italy on Sunday, Nigerians while reacting to the incident on social media, expressed outrage at the seemingly loud silence of the Federal Government.

The deceased girls said to be between the ages of 14 and 18 were found dead in the sea while attempting the dangerous journey of crossing from Libya to Europe over the weekend. The bodies of the 26 female Nigerian migrants were found by Spanish warship Cantabria, who brought the bodies to Salerno, Italy, after they were purportedly sexually abused and murdered.

Atinuke Oyibo said: “It is Italian prosecutors that are investigating the deaths of 26 Nigerian women whose bodies were found at sea. Nigerians where are you?” @PremiumTweep said: “The bodies of 26 Nigerian females were discovered in the Mediterranean Sea yet no government official is talking about it.”

Kingsley Omose said: “No, these monsters will not shed a tear for the 26 Nigerian girls who died in the Mediterranean Sea fleeing from their misrule. They were our daughters, we offered them no future and now they are dead.”

Also reacting to the incident, the Center for Anti-Corruption and Open Leadership (CACOL), slammed the Federal Government for not providing a conducive environment for development of youths in the country.

The group blamed the government for the harsh economic situation in the country, which they said caused the tragedy, adding that the government at both federal and state levels must tackle the rising rate of unemployment in the country to curb the menace of human trafficking.

CACOL Director, Debo Adeniran, said: “The problems of illegal migration and trafficking are an accumulated issue. We have a high population of children and youths in this country and we are not planning for their future. Workplaces are winding up and no new jobs are springing up. This is why people want to leave and look for the proverbial ‘greener pastures.’”

With the continued silence of the Ministry of Foreign Affairs, the Italian authorities have begun arrangements to bury the dead. According to the BBC, the Police Prefect Malfi, who called this a human tragedy, had appealed to neighbouring towns to ensure dignified burial for the Nigerian women.

Meanwhile, 83 of the 142 Nigerians deported from Libya on Monday were received by the Edo State government. They were received and lodged in a hotel with a view to rehabilitate them by the chairman, task force on trafficking, Prof. (Mrs.) Yinka Omoregbe, who is the Attorney-General and Commissioner for Justice in the state.

A 17-year-old girl identified as Blessing Sunday, has narrated how she survived harrowing experience in the desert in her quest to get to Europe. She was among the 147 Nigerians that were deported from Libya and was brought to Edo State yesterday.

She was all tears when she spoke of how her father sold his belongings to raise money to bail her after she was abducted and kept in a cell in Libya. Blessing stated that she dropped out of school in Junior Secondary School to learn hair-dressing before a woman offered to assist her to travel abroad. She said several persons in the three Hilux vans they boarded from Kano to Libya died due to starvation and thirst.

“When we got to Libya, I was kidnapped. They made me go call my father and he sold his property to set me free. I am the last child of the family and we don’t have anything at home now. There was no food or water in the trip. You see people dying. We bought provision and water and I managed my own in order to survive. My father sold all his property to enable me get to the seaside. I didn’t enter boat on the sea.”

Another returnee who gave his name as Micheal Ogbebor and had Plaster of Paris (PoP) on his two hands said he broke his two hands when the ‘White house’ in Suprata they were staying was attacked.
Micheal said he used to wash cars in Lagos from where he raised the sum of N300,000 with which he traveled to Libya.

“I spent eight years to save the N300,000 I used to travel. In Libya, people were always ‘kalabushing’ each other, that is tracking each other’s boat. I have not entered the boat when I was rescued and brought back. I wanted to jump from a storey building when I fell. They came and saw that I was finished so they left me. It was the UN that came and took me to the hospital.”