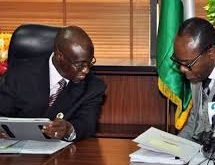 He stated this while reacting to the Kachukwu Leak Memo sent to the Nigeria President on alleged allegations of insubordination and awards of contract of about $250 billion carried out by the GMD NNPC (Baru) without due process.

Alasoadura who spoke during a live programme on Channels Television entitled, Sunday Politics, argued that not only the NNPC Boss, but also the Minister of Petroleum should be suspended. He noted that keeping the latter while investigating the allegation may hinder the findings into unveiling contract scandal currently taken place in the sector.

“I believe so; especially the man who is doing the day-to-day running of the organisation. In order not to hinder or hamper that investigation, because records will be needed and even from the date of the leakage of that letter, I think action should have been taken to ensure that nothing will be missing when investigations start
“So, I think the two of them should be asked to step aside and when investigation is over, whoever is culpable will go and whoever is not culpable, will continue with his duties,” he said.

The Senator also faulted Buhari doubling as both President and Minister of Petroleum and advised him to step down from his ministerial position and appoint a substantive minister who would be able to do the job more efficiently.

“Judging from the many problems plaguing our country today, I believe Mr. President should devote more time to other things and let an independent person run the petroleum resources ministry who will then report to him twice or once a week,” he said.

Senator Alasoadura, iterated that 40 firms that received the $25 billion contracts would be invited by the Senate.

“We are probing them because we want to get to the root of this matter. If you are doing an investigation, even those who have not been mentioned may have to be invited, but as of today, these are the people that we think should be invited and from there, we may need to invite many more organisations as the probe continues,” Alasoadura added.
The companies are listed on the NNPC website as benefiting from crude term contracts.