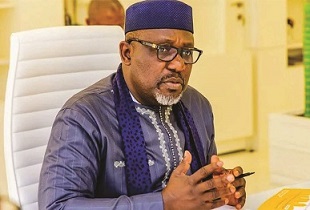 A Former Governor of Imo state and Senator representing Imo West Senator, Rochas Okorocha has linked the activities of the deadly unknown gunmen in the State to Governor Hope Uzodinma.

Okorocha alleged that unknown gunmen in the State get their instructions from the Uzodinma-led government.

Speaking with Channels Television on Tuesday, the Senator claimed that the gunmen are rogue police officers working without the consent of the police authorities.

According to Okorocha: “It appears to me as though the misery behind unknown gunmen has been unravelled by recent happenings.

“They get instruction from the government led by Hope Uzodinma and his CSO Shaba to go and arrest people, lock them up at will and sometimes the whereabouts of these people are unknown.

“Something is now unravelled. That is the good news about this.”

The former governor of the state noted that the arrest of his son-in-law, Uche Nwosu, was an indicator to his claim.

Nwosu was arrested during a memorial service for his mother at the St. Peter’s Anglican Church, in Eziama-Obieri, Nkwerre Local Government Area of the State.