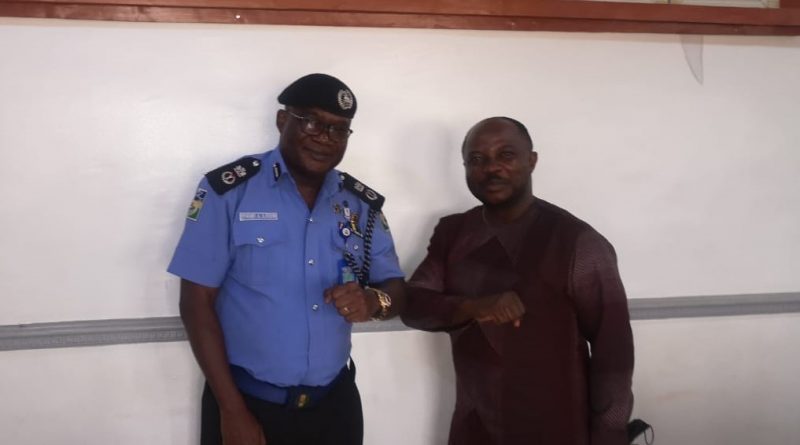 Ogun State Commissioner of Police, Mr. Edward Ajogun, on Tuesday, applauded the committed efforts of the National Association of Online Security Reporters, NAOSRE at bridging the gap of communication between citizens and security agents.

The Commissioner made the remarks in Abeokuta, Ogun State capital when Mr. Femi Oyewale, NAOSRE President, led the association’s team to pay him a courtesy visit at his Eleweran office.

“At the moment, insecurity is a big threat to us as a people and as a country. To solve it requires collective efforts. That is why I am particularly happy with your association that is doing so much to keep Nigerians informed about our activities,” the CP stated.
Despite his good impression about the media, Edward Ajogun however expressed reservations about over sensationalized news items for the purpose of attracting readership and called for more commitment to investigative journalism to achieve balanced reportage.

“There are false publications and lots of inaccurate reports. These are harmful to security. Try and be honest and build a reputation of honesty for the association.
“Always consider national interest in your reports so that your association can become the standards for measuring accuracy,” he advised.

Earlier, Femi Oyewale espoused the mission of NAOSRE which includes but not limited to setting a standard on security reportage for national harmony.

He explained that the loss of confidence by citizens on security agents needs co operative efforts to checkmate.
He therefore called on the CP and other heads of Nigerian security formations to be available for conversations so that journalists would de emphasize the reliance on third party narratives in writing reports.
“NAOSRE is unique in style and scope. Nigerians and security agents can always count on us for credible reportage,” he promised.

Meanwhile, a statement from the Command’s spokesman, DSP Abimbola Oyeyemi, and made available to NAOSRE stated that two suspected armed robbers who dispossessed one Nonso Nwibo, a rice merchant, of cash sum of #120,000 at Ipamesan area of Sango Otta have been arrested by men of Ogun State Police Command.

The suspects, according to Oyeyemi, were arrested following a distress call received by the DPO, Sango Otta Division, CSP Godwin Idehai that robbers have invaded the shop of the said Nonso and robbed him of N120, 000 as well as his Techno handset at gun point .

Upon the distress call, the DPO Idehai quickly led his men to the scene, but on sighting the policemen, the robbers took to flight, but they were hotly chased and one of them by name Sadiiq Hassan was arrested with a locally made pistol while the other one escaped.

Following diligent investigation, the second suspect, Kudus Rasak, was apprehended on the 19th of April 2021, in a hideout at Owode Ijako. A live cartridge was recovered from him.

The two suspects have confessed being the robbers that robbed Nonso of his valuables.
CP Edward Ajogun has ordered the immediate transfer of the suspects to the State Criminal Investigation and Intelligence Department for discreet investigation.

2019: Atiku will do if he becomes Nigeria’s president – Saraki reveals

Alleged fraud: Hushpuppi to be extradited to Nigeria …as INTERPOL confirms arrest