Okagbare suffers disqualification after a false start in 100m final 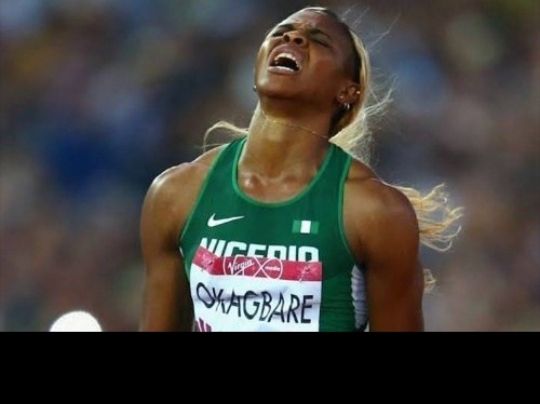 Nigerian track and field athlete, Blessing Okagbare on Monday suffered disqualification after a false start in the women’s 100 metres semi-finals heat 1 in Rabat at the 12th African Games.

The News Agency of Nigeria (NAN) reports that she was disqualified for beating the gun at the starting block.

It was a huge disappointment for Okagbare who had earlier in the day won heat 3 of the event’s first round with a time of 11.53 seconds.
She was already looking forward to Tuesday’s final of the event at the Prince Moulay Abdellah Sports Complex before the unfortunate incident.

“This is disappointing. I was already looking forward to appearing in the final, but this is disappointing,” the 2008 Olympics women’s long jump bronze medalist said.
The heat was however won by Cote d’Ivoire’s Marie Ta Lou who returned a time of 11.36 secs, with Kenya’s Maxmila Imali finishing second with 11.71 secs.

Joy Udo-Gabriel who earlier in the day won heat 4 of the first round with a time of 11.46 secs helped to make up for Team Nigeria by winning heat 3.

She advanced to Tuesday evening’s final with a time of 11.47 secs.

Aniekeme Alphonsus who recorded 11.67 secs to advance in the morning from heat 5 also got a final spot after placing fourth with 11.82 secs in the semi-finals’ heat 2.

Alphonsus and Udo-Gabriel will now contend in the final with Ta Lou and Imani.

They also have Ngoye Natacha of Congo, Gina Bass of The Gambia, Basant Hemida of Egypt and Tebogo Mamathu of South Africa to battle against in the search for medals.