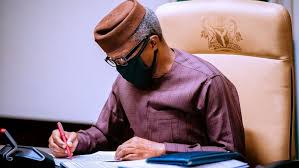 The Residents of Oyo State has woke-up to the Campaign posters of Vice President Yemi Osinbajo, pasted at some strategic areas of Ibadan, the State capital.

The portrait posters of the Vice President, have ‘Osinbajo for All 2023’ boldly written on them.

The posters were pasted at Dugbe, Mokola and University of Ibadan/Bodija Junction and Iwo Road, among other areas in the ancient metropolis.

The VP is being tipped to succeed the President, Major General Muhammadu Buhari (retd.), who is billed to leave office in 2023.  But Osinbajo has not publicly declared any intention to join the presidential race.

A group, Osinbajo For All  Volunteer Group, had some months ago, in a statement, said they were sensitising Nigerians to the suitability of the VP for the President position because of his qualities and experience.

When contacted on Friday, the National Coordinator of the group, Peter Ogundeji, said the group was behind the posters in Ibadan.

He said Osinbajo did not ask the group to campaign for him but its members were rooting for his possible emergence as Buhari’s successor.