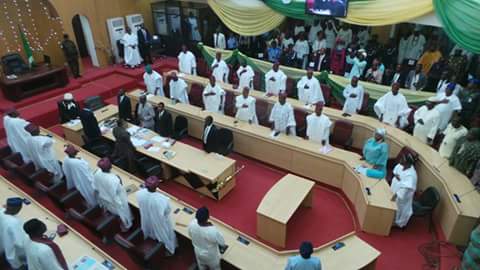 The report which was adopted during the plenary of the House on Tuesday was presented by the Chairman House of Assembly Committee on Finance and Appropriation, Taiwo Adebayo Olodo.

After a motion moved by the House Majority Leader, Maroof Olanrewaju and seconded by Chairman, House Committee on Finance and Appropriation, Taiwo Adebayo Olodo, the report of the document submitted by the committee was also ratified and approved by the House of Assembly.

In his remark, the Osun House Speaker, Timothy Owoeye said the MTEF explained the financial objectives of the government and described it as the state economic projection for the financial year expenditure.

Owoeye noted that the report of the House of Assembly Committee on Finance and Appropriation on the presentation of 2022-2024 Medium Term Expenditure Framework (MTEF) Economic and Fiscal Update (EFU), Fiscal Strategy Paper (FSP) and Budget Policy Statement (BPS) came at the right time.

The Speaker also asked the Osun Internal Revenue Service (OIRS) to furnish the House of Assembly with the revenue generation for the past six months within seven days.

He called on the state governor, Adegboyega Oyetola to proceed to lay before the House of Assembly the year 2022 budget estimate of the state.