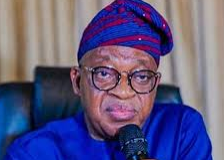 The warning was also directed at the Osun State Independent Electoral Commission (OSSIEC).

The PDP maintained that the exercise would be illegal, unlawful and unconstitutional.

In a statement signed by Abioye Hashim, Secretary, Osun PDP Legal Committee, the party added that the exercise would also be wasteful, especially at this crucial period and process of transition to the awaiting PDP administration and countdown to the taking over of power by the Osun State governor-elect, Senator Ademola Adeleke.

Noting that it was reliably informed that the APC-led administration in the State had concluded plans to embark on the illegal, unlawful and unconstitutional voyage, the Osun PDP stressed that such was targeted at siphoning Osun public funds as it would definitely turn to be wasteful and fruitless in the end.

“The Osun PDP wishes to remind Governor Oyetola and his OSSIEC that for close to 4 years since the coming into office of Governor Oyetola and since the inauguration of OSSIEC by the Oyetola-led APC Administration, the APC has failed to conduct Local Government elections in the State, despite persistent demand by the PDP.

“It is also to be put on record that the PDP resorted to a litigation which is still pending before the High Court of Osun State in HOS/M.139/2021, with PDP as the plaintiff, and Governor of Osun State, Attorney-General of Osun State, the Osun State House of Assembly, the OSSIEC, the APC and the caretaker chairmen in the LGAs, ACDAs and the LCDAs as Defendants to question the legality, propriety and lawfulness or otherwise of the caretaker committee set up by Governor Oyetola instead of conducting valid Local Government elections to usher in a constitutionally recognised Local Government Administration in Osun State, so the matter is subjudice.

“Between now and 26th November, 2022 when the Administration of Governor Oyetola will come to an end, it is clearly less that 360 days, therefore making the planned Local Government election dead on arrival being a nullity ab initio.”

While calling on the citizens of the State to hold the administration of Adegboyega Oyetola responsible for any illegality, the party advised Governor Oyetola to focus on how to give account of his stewardship.

It also advised him to set up a transition committee comprising of teams from both camps so as to lay a solid foundation for a seamless, transparent and hitch free handing over of power to the incoming government on November 27, 2022.

Recall that the governor-elect had issued a statement alleging that government officials were planning on looting and diverting government assets.

The State government in a counter statement described the allegation as false.

The State government also stated that Governor Adegboyega Oyetola was focused on governance and to deliver to the people of the state.