The ruling All Progressives Congress (APC), has called on security agents in Nigeria to probe the recent “strategy meeting” by the opposition  Peoples Democratic Party (PDP) presidential candidate, Atiku Abubakar, had with his team in Dubai.

In a statement released by its deputy national publicity secretary, Nabena Yekini, the party said there is more to the trip. According to Nabena, the political meeting of the PDP presidential candidate was for other sinister political purpose.

“There is more to the meeting that meets the eye. Nigeria has enough meeting/conference rooms, many of which meet international standards. It is therefore clear that the Dubai meeting was for other sinister political purposes ahead of the 2019 general elections. Our intelligence, anti-graft and security agencies must be awake to its responsibility of investigating the Dubai meeting. Cash-and-carry politicians must be prevented from moving illicit cash around to induce voters and sponsor election violence and rigging.”

The party claimed that the personalities involved in the said meeting which had in attendance, Bukola Saraki, Peter Obi, Reno Omokri and others, had a series of meetings in a similar fashion in Nigeria but that it was obvious that the meetings failed to yield the desired results here in Nigeria and so they moved to Dubai to perfect their sisniter plans. The party asked security agencies to check suspicious movements of cash.

“We are mindful of how millions of dollars were confiscated in an aircraft belonging in a Nigerian PDP sympathiser in South Africa in the lead-up to the 2015 elections. Another round of election is here and it is not unlikely that they are playing a repeat performance, under the guise of holding a meeting in Dubai. Our security agencies should be on the watch for a stitch in time saves nine.” the party statement read

In a swift reaction, the PDP says the call for a probe into Atiku’s Dubai meeting, shows the ruling party is petrified of their imminent defeat in the 2019 election. Read their statement below

The Peoples Democratic Party (PDP) says the chaotic fretting by the Muhammadu Buhari Presidency and the All Progressives Congress (APC) over the strategy meetings by our Presidential candidate, Atiku Abubakar, is defeatist and a clear sign that they are already petrified ahead of the 2019 electoral contest.

The party said since the emergence of Atiku Abubakar as PDP Presidential candidate, the panic-stricken Buhari Presidency and the APC have abandoned governance for smear campaign and now fret over the strategy meetings because they know that the outcome will dismount their incompetent, deceitful and disconnected administration.

APC is panicking over our strategy meetings because it did not only fail to deliver on the promises it made in the past, but is also completely bereft of ideas required to solve the problems it caused, even as it knows that it cannot drive our country in this 21st century.

Is it not ludicrous that the APC has become so disoriented that it is now issuing statements about the venue of our meetings which does not offend any section of our laws, and for which it has now rented itself to lies and spurious allegations?

By its statement, the APC has demonstrated its confusion, lack of organization and tact to manage itself and the responsibilities of governance; the very reason our country has been in dire strait since the last three and half years of the Buhari administration.

Moreover, the APC and its Presidential candidate, President Muhammadu Buhari are entangled in enough personal and collective crisis and we counsel them to face their problems instead of dabbling into the issue of venue for our meetings.

If President Buhari and the APC had sat down to draw up strategies for governance, our nation would not be facing the economic, social and security woes that have brought her to its knees in the last three and half years

The PDP and our Presidential candidate will therefore not allow a dysfunctional and rejected party like the APC to distract us from our partnership with Nigerians in the all-important mission to remove the incompetent administration of President Buhari.

Finally, the APC should know that it is fighting a lost battle as Nigerians are with our candidate, Atiku Abubakar, and they know that he will not engage in anything illicit. 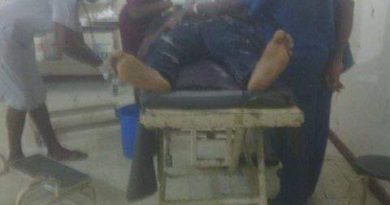 Buhari plans to extend tenure of IG of Police, Idris – PDP reveals why