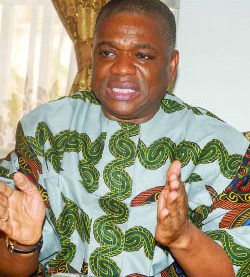 All Progressives Congress (APC) Abia State, has stated that the fake posters of former governor of Abia State with the inscription”Vote Orji Kalu for President in 2019″  in Lagos, Abuja, Umuahia and other cities is the handiwork of political jobbers.

In fierce response of the act, Abia State Chairman of the APC, Hon. Donatus Nwankpa stressed that the ones planning and executing the ill and ignoble project
are members of the Peoples Democratic Party (PDP) in Abia State, who are envious of the massive support the APC is galvanising at the grassroots.
He expressed confidence in the President Muhammadu Buhari government, adding that Ndigbo will benefit immensely if the entire five states in the South East are governed by the APC.