Pero’s Dad Claimed Tuface Married His Daughter In 2019, Could This Be True? 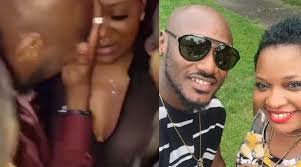 Pero’s Dad Claimed Tuface Married His Daughter In 2019, Could This Be True?

Jide Adeniyi, the father to Pero Adeniyi, one of the Tuface baby mamas, once claimed that his daughter got married to the Afrobeat singer.

A 2019 interview, that’s now resurfaced online, Jide said he wanted to know what Tuface’s intentions were with his daughter when they started going out and having kids.

He said, when he learned that the singer was seeking her hand in marriage, he spoke with his daughter after which he gave his blessings.

Jide alleged that Tuface would later proceed to marry another woman after his daughter had given him his first three children.

He also insisted that Pero and the Afrobeats singer “are married up to date”.

“Tuface was brought to my life by my daughter. They were going out, had the first, second and third child. I didn’t just welcome him. I wanted to find out what he was after,” Pero’s father could be heard saying.

“Got to know that he wanted to marry my daughter. I asked my daughter what she saw in him. She replied that she loved him and I blessed them. I wanted her happiness.

“The last I saw TuFace was about two years ago. They’re married up to date. After my daughter, he married another woman.”

The Afrobeat singer and Annie Idibia, his wife, have been in the news since after she called him out for allegedly spending nights with Pero on the ground that he was visiting his kids.

Their families have also been in a heated exchange of words on social media platforms but Tuface had remained silent.

The veteran musician had, however, urged his friends and family members to “stop the madness.”

He also begged the public “to please respect our privacy and our kids, let us deal with our issues internally.”