HomeOTHERSPhoto: 400 level student of CRUTECH crushed to death by 'drunk' 200...
OTHERS 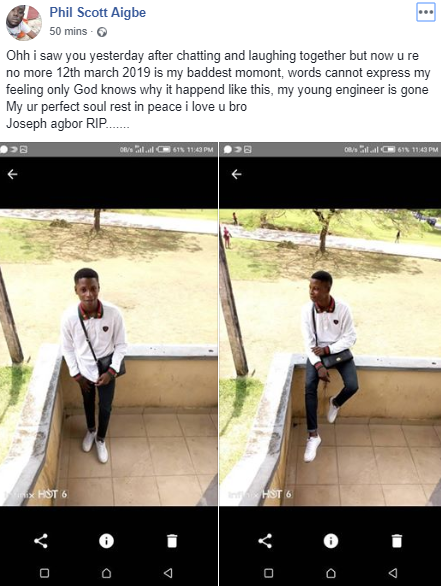 A student, 400 level, of the Cross River University of Technology, CRUTECH has been killed by an alleged drunk 200 level student on campus.

Joseph Agbor, a Civil Engineering student of the institution, was reportedly sitting by the gutter on Tuesday, waiting for his lecture at the Calabar Main when a drunk 200 level student, driving his friend’s car, lost control of the car and rammed into him.

Joseph was rushed to the hospital immediately after the accident yesterday but he was dead on arrival.

The police have taken custody of the drunk driver and the vehicle.

Share
Facebook
Twitter
Pinterest
WhatsApp
Previous articleEx Vatican treasurer, Cardinal George Pell sentenced to 6 years in prison for sexually assaulting 2 choirboys
Next articleWe shall be witnesses to your being nailed at the cross for all your sins against Imo people- Charly Boy to Rochas Okorocha