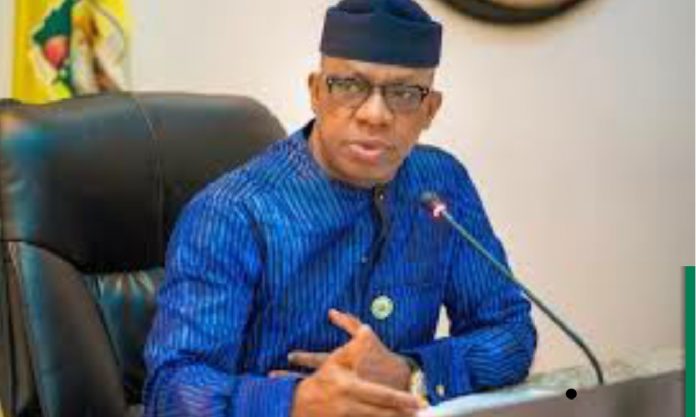 Abiodun who made this known in his New Year broadcast, noted that the new initiative would not only bring the much needed succour to the people, but ensure that water is readily made available across the state.

“We will ensure Improved provision of potable water supply in our major towns and cities through continuous upgrade of production capacity and distribution network. We are introducing community based water supply known as water kiosking, a new initiative that will bring potable water supply to several communities across the State,” the governor stated.

On the issue of some parents and guardians bullying teachers in the state, Abiodun vowed that such act would be met with swift sanctions.

“Let me however warn that any act by pupils, students, parents, and guardians that undermines the conducive environment for teaching and learning will be met with swift and severe sanctions. Our schools and institutions cannot be practice pitches for any form of violence, either against a fellow learner or teachers. Ogun State is renowned for Omoluabi ethos and no one will be allowed to rubbish this proud heritage,” he said.

Abiodun, while also noting that his administration would be implementing its Public Private Partnership initiatives for power generation in the state, added that the initiative would improve and guarantee electricity supply to major cities and clusters in the state.

The governor, who also said that the implementation of its multi modal transport master plan would commence with its modern bus mass transit, added that mass transit scheme when launched across the state, would be deepened and extended to cover other modes of transportation.

Disclosing that the rejigged Ogun State Health Insurance Scheme would be unveiled for the use of the people in the new year, the governor acknowledged the enterprising spirit of market men and women in the state and disclosed that he had approved the injection of more funds into the Oko’wo Dapo Scheme.

He added that the Ogun State Enterprise Development Agency will roll out a number of initiatives to support the micro, small and medium enterprises in the state.

“This month, the rejigged Ogun State Health Insurance Scheme will be unveiled, I am delighted that even ahead of the formal launch, the scheme has recorded significant enlistment of would-be beneficiaries.

“I salute the enterprising spirit of our market men and women. You are the backbone of trade and commerce. We will continue to empower and provide you with all the necessary support to make the new year more rewarding and prosperous for you.

“In this regard, I have approved the injection and disbursement of additional funds into the Oko’wo Dapo scheme. The scheme has been repackaged to benefit from the lessons and improve on the pilot scheme,” he said.

The governor further disclosed that a Mother and Child hospital in conjunction with the AbdulSamad Rabiu Africa Initiative would soon berth at the Olabisi Onabanjo University Teaching Hospital, adding that the public private partnership agreement in respect of the 250 bed hospital left uncompleted by the immediate past administration would soon be finalized.

“Our secondary and tertiary health institutions will continue to receive due attention. Specifically, the ongoing rehabilitation and upgrade of facilities at Olabisi Onabanjo Teaching Hospital (OOUTH), Sagamu. This flagship tertiary health facility will also host our new ultra-modern mother and child hospital through partnership with the private sector ( the AbdulSamad Rabiu Africa Initiative (ASR Africa). Likewise, the public private partnership agreement in respect of the 250-bed proposed specialist hospital at Oke-Mosan, Abeokuta will be finalized and operationalized,” he said.

He listed roads that would receive priority attention by his administration to a linclude Ijoko-Akute-Alagbole Road; Siun-Owode Road; and Ilishan-⅞Ago Iwoye road amongst others.

“Our priority will be to complete and commission all the ongoing projects that we have either initiated or inherited that have direct economic benefits to the people. Some of these projects include Atan-Lusada-Agbara expressway which on completion, will represent the most expensive road project by this administration.

” Other roads that will receive priority attention by our administration this year include Ijoko-Akute-Alagbole Road; Siun – Owode Road; and Ilishan – Ago Iwoye Road. Special attention will be paid to Togbunrin road in Ogun Waterside and Ikangba -Ilese and Esure road in Ijebu East,” he said.

The govenor while also noting that the Lagos- Ota-Abeokuta road as well as the Ota-Idiroko road would receive priority attention through partnership agreement with the Federal Government and the private sector respectively, added that palliative works would also be done on failed portions of the two roads.