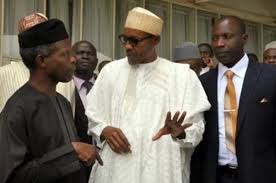 President Muhammadu Buhari has revealed that he will put his carbinet into new order in no time. He stated this during the National Executive Committee (NEC) meeting of the All Progressives Congress (APC). He said the measure was aimed at injecting “news ideas” into the governance of the country.

Mr President stated that the measure was aimed at calming frayed nerves among supporters of the party who felt excluded from the scheme of things in the country.

He lamented the delay in reconstituting boards of federal parastatals, said he was aware of the eagerness by the supporters of the party to get the appointments as soon as possible.

Buhari, who applauded the Chief John Odigie-Oyegun-led National Working Committee (NWC) of the party, also expressed gratitude to the chieftains of the party who prayed fervently for his recovery while he was on health vacation in the United Kingdom (UK).

Meanwhile, a section of the APC governors maintained that President Buhari was in good stead to run on the platform of the party in the 2019 poll.

Some of the governors, who spoke separately with newsmen in an interview yesterday at the APC national secretariat before the party’s NEC meeting, made reference to President Buhari’s integrity, couple with his performance since 2015 to justify their position.

Also, members of NEC of the APC yesterday at the parley, which lasted for over two and half hours, passed a vote of confidence on President Buhari.

Spokesperson of the party, Malam Bolaji Abdullahi, who briefed reporters on the outcome of the parley held behind closed-doors, further said that a vote of confidence was also passed on the National Chairman of the party, Odigie-Oyegun.

Abdullahi said that the motion to pass a vote of confidence on President Buhari was unanimously endorsed after the Minister of Agriculture, Chief Audu Ogbeh, briefed the NEC on the achievements of his ministry.

In another development, the newly-appointed Secretary to the Government of the Federation (SGF), Boss Gida Mustapha, has said that all appointees of the President Muhammadu Buhari-led administration must key into the government’s vision to deliver the dividend of democracy to Nigerians.

Mustapha, who is expected to be officially sworn in as the new SGF before the commencement of the Federal Executive meeting today, told State House Correspondents yesterday after a closed-door meeting with Buhari in the Presidential Villa, Abuja, that the administration which came under the platform of the All Progressives Congress (APC) sought the mandate of Nigerians during the campaigns in 2015 and it therefore behoves the appointees not to disappoint the people.