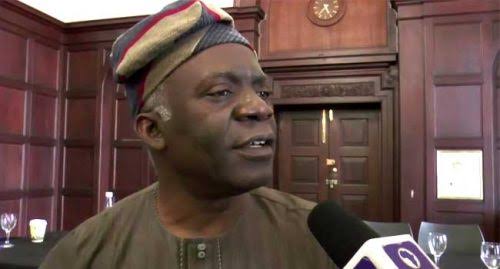 The human rights lawyer, Femi Falana has called for the prosecution of all the Department of State Services operatives who prevented the Economic and Financial Crimes Commission from arresting former heads of two agencies.

You will recall that Earlier in the week, EFCC officials stormed the residences of Ita Ekpeyong, former director-general of DSS, and Ayo Oke, sacked director-general of the National Intelligence Agency (NIA), to arrest them for failing to honour its invitation.

While Oke was invited for questioning over the $43 million found in an Ikoyi apartment, Lagos, Ekpeyong was summoned over his alleged role in the arms scam involving Sambo Dasuki, former national security adviser (NSA).

But personnel of the secret police shielded both men.

Speaking in Lagos at the national seminar on the ‘recovery of noxious funds’ organised by the University of Kent, Falana asked President Muhammadu Buhari not to treat Oke and Ita, as “sacred cows”.

The lawyer said if they were treated as such, other criminal suspects would leverage on that to resist arrest and prosecution.

Falana described the standoff between the DSS and EFCC as a clash between legality and criminality.

“Although the federal government is characteristically silent on the dangerous trend some concerned Nigerians have condemned what has been referred to by the media as a demonstration of inter-agency rivalry,” Falana said.

“While foreign governments which have benefited from the proceeds of corruption are reluctant to recover and repatriate the nation’s looted wealth some highly-placed public officers have decide to use their positions in the government to frustrate the arrest of former security chiefs in a bid to shield themselves from possible arrest and prosecution.

“If the two former security chiefs are allowed to be treated like sacred cows by the federal government, other criminal suspects are going to resist arrest, investigation and prosecution under the principle of equality of citizens before the law.

“ I can imagine that some lawyers will seek to enforce the fundamental rights of many suspects to freedom from discrimination guaranteed by section 42 of the constitution.”

Falana condemned some officials of the federal government who are allegedly “frustrating the fight against corruption being prosecuted by the Buhari administration”.

He said “unless the federal government is prepared to confront impunity at home and abroad the war against corruption will soon be lost”.

The lawyer added that the excuse of the SSS that officials of security agencies enjoy immunity cannot stand as the DSS had in the past arrested a former national security adviser and some judges.

“It has been said that in frustrating the arrest the SSS was acting on a regulation which stipulates that officials of security agencies cannot be requested to account for public funds allocated to them,” he said.

“With respect, if any such regulation exists it is illegal and unconstitutional as the police and the anti-graft agencies have been empowered to investigate the mismanagement or diversion of public funds appropriated to any agency by the national assembly.

“For goodness sake, was the immunity of a former National Security Adviser put in abeyance when the SSS stormed his houses at Abuja and Sokoto in July 2016 and arrested him? Why was the regulation not applied when the SSS dragged him before the Federal High Court for money laundering and illegal possession of firearms?

“Why was the EFCC allowed to investigate and charge him with corruption and stealing at the Federal High Court of the Federal Capital Territory High Court?”

“It is my submission that by conferring immunity of the heads of two former security agencies is the Buhari administration saying that there are citizens who are above the law in the ongoing war against corruption and impunity?”