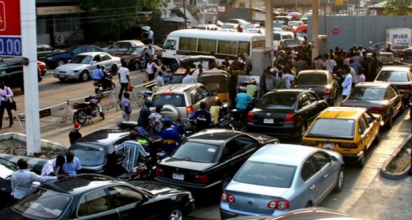 Lagos: upsurge of queues as motorists rushes to filling stations against the backdrop of the ULC on going strike.

Also, offices of Electricity Distribution Companies, DISCOs, were closed as the strike by  ULC entered day three today.
However, the federal government revealed yesternight that there would be a joint briefing today by the Minster and ULC leaders.
Meanwhile, investigations carried out by our reporters revealed that most filling stations across the Lagos metropolis witnessed upsurge of motorists and others queuing to buy premium motor spirit, PMS, also known as petrol.

In places like Festac Town, Oshodi-Apapa Expressway, Ikorodu Road, Abeokuta expressway, Badagry expressway,  and Agege Motor Road, most filling stations had queues of anxious motorists and other consumers filling their tanks and buying in jerry cans. A motorist who spoke on condition of anonymity at a filling on Ikorodu Road, said he decided to fill his tank and a 25-litre jerry can to avoid unforeseen circumstances.