Rotimi Amaechi, Minister of Transportation, on Thursday called for the support of the United Nation to help establish extreme for road offenders in the country. Amaechi made the call when a delegation of the United Nations Decade of Action on Road Safety and Traffic Injury Prevention Nigeria visited him in Abuja.

He said that implementation of stiffer punishments such as going to jail for offenders of the law, then road users, especially politicians, would obey the traffic laws.

Amaechi noted that the emergence of the advocacy from the State parliament, judiciary and the police for enforcement as this will limit the freedom of road users and instill discipline.

“The problem of road safety in Africa, not only in Nigeria, is basically the problem of consequences for action; if every human being can discipline himself or herself, then there won’t be need for parliament.

“The reason there is a parliament is because they have to direct how the society should be governed; the judiciary and police are there for the consequences of disobeying that law.

“So, if you are doing advocacy, don’t tell people not to drink and drive, tell them the consequences of drinking and driving; if they know they will spend two months in prison, they will not drink and drive.

“Go to the state, get the parliament to pass more stringent laws, especially if the consequences include going to jail, no politician will want to go to jail, when you finish with the parliament go to the police to enforce.

“Nigerians are not organised, which is not associated with our population; China, whose population is higher than Nigeria is more organised in obeying traffic regulation,’’ Amaechi said.

“The United Nations Decade of Action on Road Safety and Traffic Injury Prevention Nigeria is a multi-sectorial stakeholders forum involving all the key relevant stakeholders involved in road safety issues.

“Injury prevention, which is the mandate of the United Nations, was signed by various countries including Nigeria in 2010 and it was launched in the country in 2011 ; it has been running since then.

“The mandate is to spread advocacy on road safety and injury prevention; a lot of work needs to be done in putting road safety in everyone’s consciousness,” he said. 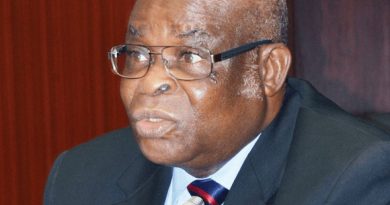 Onnoghen Granted Bail On Self Recognition, Pleads Not Guilty To ll Charges