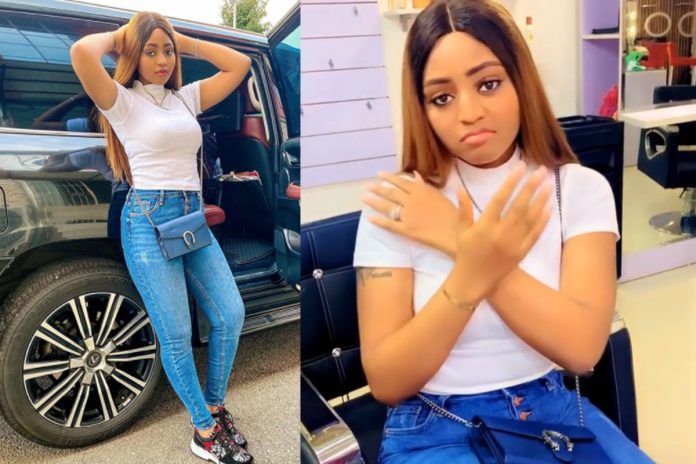 Popular Nollywood actress, Regina Daniels, has spoken on the face-off between her husband, Ned Nwoko and aphrodisiac seller, Hauwa Saidu Mohammed, AKA Jaruma.

Ned Nwoko had reportedly arrested and dragged her (Jaruma) to court for defamation of character.

The FCT Upper Court had remanded Jaruma in Suleja prison.

Writing on her Instagram page, Regina Daniels said her friendship with Jaruma hit the rocks after the ‘Kayanmata’ seller refused to take down a post where she accused her of being the cause of the crisis in her family at the time.

Recall that Jaruma had claimed that her product used by Regina Daniels was responsible for the collapse of Nwoko’s marriage to Laila.

But, the actress  claiming she was just paid to advertise.

“Miss jaruma ruined every form of agreement or friendship we had when she falsely said to the general public that I was the cause of a major crisis going on in my family I went ahead to message her to take down the post but she didn’t.”

The actress further denied claims that Jaruma’s arrest had something to do with the business deal they both had.

“Please note the petition, arrest and the detention of Jaruma has absolutely nothing to do with the business deal between me and her. But simply arose from the various false and malicious publications against my husband.

“I’m writing this because I feel y’all deserve an explanation to the general misrepresentation going around me being paid for a job and not able to deliver. The fact is that I delivered on the job based on our various discussions,” she added.