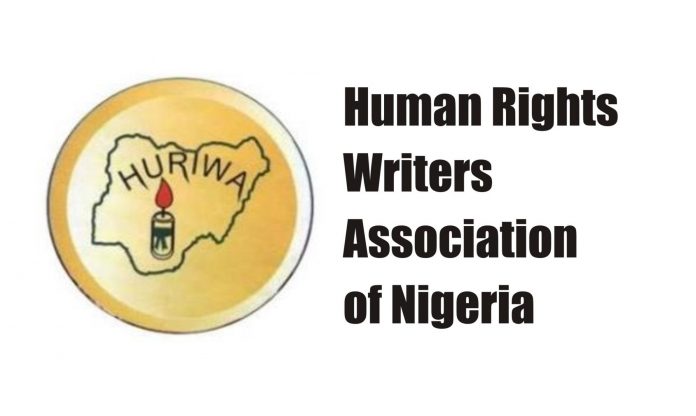 The Human Rights Writers Association of Nigeria, HURIWA, has written the United States of America in respect of the recent delisting of Nigeria from countries “engaging in violation of religious freedom.”

US Secretary of State, Antony Blinken, on Wednesday announced that Nigeria has been removed from the list of countries with high-level religious intolerance.

Blinken also added that the American government had blacklisted Russia, China and eight others as Countries of “Particular Concern for having engaged in or tolerated ‘systematic, ongoing, and egregious violations of religious freedom.”

Nigeria was listed among such countries in December 2020 by the US under the leadership of President Donald Trump.

Angered by the decision and with alleged evidence of religious intolerance and violation of freedom by the current administration, HURIWA had earlier kicked against the Joe Biden government’s decision.

In creating more awareness and providing more information to prove that the US government’s decision is not in line with what is obtainable among the people of Nigeria, the human rights group on Friday sent a disproving letter to the US embassy.

The letter addressed to the US Secretary of State, Antony Blinken, said, “The curious decision of the US government to take Nigeria off the list of countries violating religious freedom came to the Christian community in our country as a rude shock.

“HURIWA, with a great sense of responsibility and burden, wishes to draw the attention of the US government to the fact that the situation regarding religious freedom is not in any way better than what obtains in any of the listed countries to warrant removing Nigeria from the list.

“The United States as the bastion of democracy, a beacon of human rights and the last hope of weak nations under oppressive regimes cannot afford to relinquish the noble role of keeping such countries safe and fairly free from religious intolerance. The consequences of the US relinquishing the God-ordained role can only be imagined.

“For Nigeria particularly, striking off the country from the list of violators of religious freedom and rights when the country should move up the ladder carries with it very grave consequences. Before reminding the US government of what awaits Christians in Nigeria with this clean bill given Nigeria on violation of religious rights, permits HURIWA to address two crucial issues.

“First is the rehash of the reasons the US developed the list of such dangerous nations. The Secretary of State has the responsibility to identify governments and non-state actors, who, because of their religious freedom violations, merit designation under the International Religious Freedom Act and any country to be dropped must also merit it.

“HURIWA finds it rather contradictory that the US Secretary of State, Antony Blinken would declare: “I am designating al-Shabab, Boko Haram, Hayat Tahrir al-Sham, the Houthis, ISIS, ISIS-Greater Sahara, ISIS-West Africa, Jamaat Nasr al-Islam wal-Muslimin, and the Taliban as Entities of Particular Concern.

“Yet, the Secretary of State left Nigeria out of the watch list, a nation hosting Boko Haram and ISIS-West Africa, both terrorist organizations driven by religious ideologies and Islamic expansionism. Essentially, there is a need to keep a tab on such nations and removing any such as Nigeria from the watch list will automatically take such a country off the radar and the atrocities committed by them regarding religion will generally go unnoticed by the international community.

“Second is to draw the attention of the US government particularly to the true state of religious violation in Nigeria as at today. A chronicle of some of the remarkable violations, which will be undertaken hereunder, may help the US government to regain proper perspective.

“Since the current government in Nigeria came to power in 2015, religious violence has gained impetus and Christians in Nigeria thus became endangered species as a consequence.

“Ceaseless killing of Christians in Nigeria since June 2015 and burning or destruction of their churches and other worship centers have followed incessant attacks against them by Boko Haram/Islamic State in West Africa (ISWAP), Jihadist Fulani Herdsmen and a branch of Boko Haram, called ‘Bandits/Highway Kidnappers’ engage in roadway abductions and armed robberies and house to house lootings, all for the purpose of radical propagation of Islam and raising of ‘blood funds’ for themselves and for the advancement of their terror objectives, which simply is Islamic expansionism.

“The number of Northern Nigerian Christians forced to flee their ancestral homes, farmlands and sacred places of worship in order to escape being murdered or raped has sharply risen from “over 1.3 million in 2014” to between 4 million and 5 million (see Open Doors Report 2015). The affected population has fled the countryside or relocated to less risky capital cities in Northern Nigeria or cities and communities in the Southeast, South, and Southwest parts of the country. They have become ‘urban refugees’ Some are even driven into neighbouring countries or live in IDP camps within Nigeria.

“The present-day government of Nigeria led by President Muhammadu Buhari is known to have sympathy for religious fundamentalism and statements which reflect this inclination abound. The APC-led Federal government has been justifiably accused of treating religion-driven Boko Haram terrorism with Kids grove.

“Since Boko Haram is driven by Islamic fundamentalism and targets mainly Christians, taking Nigeria off the list of religious intolerant countries presupposes that the sect has been defeated. The fact is: Boko Haram terrorism has gained fresh momentum and only recently joined forces with ISIS, to become far more potent and dangerous with many more Christians being daily killed.

“Recently, The Wall Street Journal reported that a panel of United States policymakers uncovered how Boko Haram terrorists operating in the North-East have been collaborating with armed bandits terrorising communities across the North-West to collect ransom from the Buhari administration and civilian victims. The American newspaper reported that the U.S. officials have been monitoring bandit commanders and their possible coordination with Boko Haram insurgents.

“This mutation of terrorism has been expanding its control and atrocities in the North West and in Middle Belt parts of Nigeria. The terror group is branded as ‘bandits’ but they are indeed terrorists and reports have it that they are working with Boko Haram terrorists and have the capacity to recently dawn a military jet.

“The House of Representatives Committee on Army (Nigeria) recently called on President Buhari to declare bandits terrorists to enable the Nigerian Armed Forces to prosecute the war against them. The Chairman of the committee, Abdulrazak Namdas, made the call when the Chief of Army Staff, Lieutenant General Farouk Yahaya, appeared before the committee to defend the budget proposed for 2022 in Abuja on Friday, November 6.

“It is equally important to note that the kidnapping activities of these bandits, just like Boko Haram terrorism, mainly target Christians.

“The jihadists and other criminal gangs have been given free rein in Nigeria and now kidnap schoolchildren at will. Heavily armed criminal gangs in north-west and central Nigeria often attack villages to loot, steal cattle and abduct people for ransom, but since the start of the year, they have increasingly targeted Christian schools and colleges.