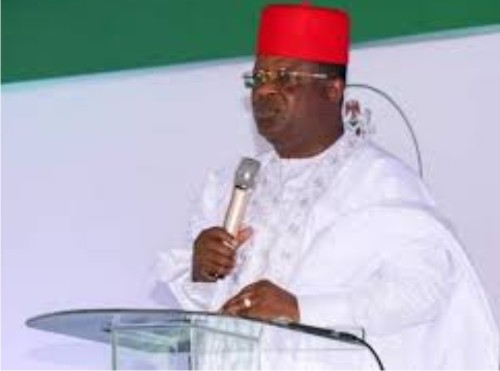 The Governor of Ebonyi State, David Umahi has said that Nigeria needs to be restructured in a way that each geo-political zone produce its own Vice-President.

Umahi stated this when he appeared on Channels TV on Monday, adding that the adoption of six Vice Presidents will quell the rising “tension” in the country.

The Governor was asked about his opinion on the lingering debate on restructuring and he opined that more powers should go to the states.

“Well, I have a different view about this restructuring thing. My position about restructuring — for example: there are certain valid suggestions that have been made, to have six vice-presidents in the country,” he said.

“Each one is kind of coming from each of the geo-political zones. Tension will go down. This is very important.

Many Nigerians believe that restructuring would play a huge role in solving the nation’s numerous challenges ranging from security, tribal conflicts and the economy.

The call for restructuring of Nigeria has, however, become very laud in the current administration as some sections of the country feel they are being marginalized.

The National Assembly is currently in the process of reviewing the 1999 constitution but some experts feel the move would not bring the needed solutions to Nigeria’s problems, calling for a totally new constitution.

Speaking further, the Ebonyi State Governor claimed that the President

Muhammadu Buhari-led government has done more projects in the South East than the Peoples Democratic Party (PDP) achieved in its 16 years in power.

Governor Umahi was elected twice as Governor under the PDP umbrella but dumped the party recently for the ruling All Progressives Congress, APC.

He also blamed his former party for the rising insecurity in Nigeria, saying is a seed planted by the former ruling party.

“The insecurity that they used against APC is a seed that was sown in 16 years of PDP administration and so it started germinating, bearing fruit at the time they were still in power,” he said.

He said the PDP introduced the hardship that the Buhari administration is doing everything to address.