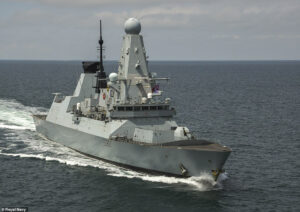 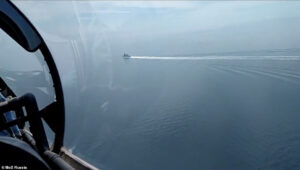 The Russian government has warned the UK that it will bomb its British warship, HMS Defender, the next time it sails too close to Crimea after warning shots were fired at HMS Defender on Wednesday, June 23.

The British Type 45 destroyer sailed within the 12-mile limit of Crimea near Cape Fiolent in the Black Sea which Russia claims as its own territory after it annexed Crimea from Ukraine in 2014.

The West sees the area as international waters and has not recognized Crimea’s annexation.

The UK is leading maritime exercises around the world alongside the US and NATO forces.

The UK has denied claims by Russia that it fired warning shots towards its ship.

On Thursday, June 24, Russia’s Deputy foreign minister, Sergey Ryabkov warned that the UK would suffer casualties if it enters its territory again:

‘What can we do? We can appeal to common sense, demand respect for international law.”

‘If this does not help, we can bomb not only in the direction but also on target, if our colleagues do not understand.

‘I warn everyone violating the state borders of the Russian Federation under the slogan of free navigation, from such provocative steps, because the security of our country comes first.’

Ryabkov added: ‘We are outraged by their [the UK’s] behaviour, and we would like to note that balancing on the brink of confrontation is fraught with very serious consequences for those who plan such events and then try to carry them out.’

In support of his comments, the Kremlin said Moscow would respond harshly to any similar actions in the future and warned against any further ‘provocations’.

The UK meanwhile is insistent that it will continue to ply the sane Sea route.

British minister George Eustice said ‘of course’ Royal Navy ships will continue to sail through the disputed waters around Crimea: ‘We never accepted the annexation of Crimea, these were Ukrainian territorial waters.’

Meanwhile Britain’s Chair of the Defence Select Committee, Tobias Ellwood, has admitted there is a prospect of an engagment flaring up with Britain’s ‘dangerous game’ of sailing in disputed waters.

He told BBC 4: ‘There’s huge scope for an accident to occur, misinterpretation, leading to an actual kinetic engagement and it could be a bit of time before somebody grabs that red phone and calms things down.’

It was the first time since the Cold War that Moscow acknowledged using live ammunition to deter a NATO warship, reflecting the growing risk of military incidents amid soaring tensions between Russia and the West.