HomeTHE NATIONSaraki’s Aide, Makanjuola & others arraigned by EFCC others For N3.5bn Fraud
THE NATIONNEWS 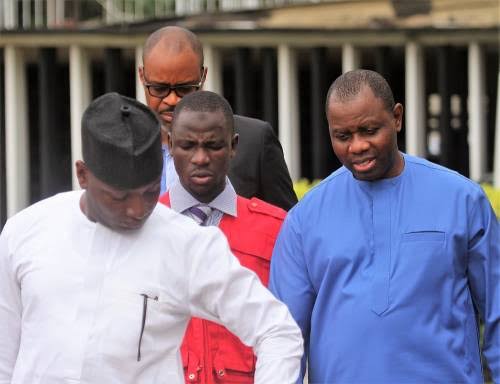 They were first arraigned on October 3, 2018 before Justice Babs O. Kuewumi of the same court.

One of the counts reads: “That you, Gbenga Makanjuola, sometime in December 2016 in Nigeria, within the jurisdiction of this Honourable Court, did accept cash payment of the sum of $500,000 (Five Hundred Thousand Dollars) only from Kolawole Shittu without going through a financial institution and thereby committed an offence contrary to Section 1(a) of the Money Laundering Prohibition Act, 2011 (as amended by Act No. 1 of 2012) and punishable under Section 16 (2) (b) of the same Act.”

The defendants pleaded “not guilty” to the charges preferred against them.

In view of their pleas, the prosecuting counsel, Kamil Bashir, asked the court for a trial date.

In his response, counsel to the second defendant, Omeoga Chukwu, urged the court to allow the defendants to continue to enjoy the bail earlier granted by the Justice Kuewumi, adding that “the terms were very stringent and verified by the EFCC.”

Justice Onyetenu granted the prayer of the defence on the existing bail.

The defendants were granted bail in the sum of N250 million each, with two sureties in like sums.

The sureties must be resident in Lagos and must have landed properties with Certificate of Occupancy, CoO, within the Lagos metropolis.

Also, the sureties must show tax clearance certificates and letters of identification from their banks.

Each of the defendants was ordered to deposit four recent passports with the Court Registrar.