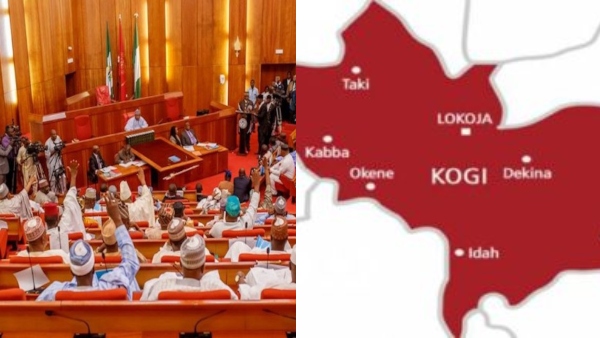 The Nigeria senate has halted a move by senator to recognize Kogi as an oil-producing state during  a plenary session on Wednesday.  The  lawmaker representing Kogi East Senatorial District, Senator Isaac Alfa had moved the motion titled, ‘Need to Recognise Kogi State as an Oil-Producing State’. According to him, Shell BP (now SPDC), Elf (now Total Fina Elf) and Agip Energy commenced oil exploration  in   1952  in Odeke, Echeno, Ihile, Anocha/Uchuchu, Omabo, Ikah, Iregwu and Ujeh, all in Ibaji of the present day Ibaji Local Government Area of Kogi State.

Senator Isaac Alfa stated that the companies collectively drilled 25 exploration wells, two appraisal wells and eight core drill wells in  Anambra Basin, with the majority of the wells in Kogi State.He further alleged that  oil  exploration  in Kogi was abandoned until July 18, 2001 when a former governor of the state, Abubakar Audu, wrote to then-Group Managing Director of  the NNPC to remind him of the discovery of crude oil at Odeke, Echeno and Anocha.

However the move to recognise Kogi as an oil-producing state was rejected by the Senate, who however unanimously approved the prayer  urging  Kogi, Anambra and Enugu states to resolve their border  disputes. Senator Magnus Abe stated that the Senate had no power to declare any state  an oil-producing state, citing Section 162 of the constitution.

Abe said, “In this entire motion, my colleague has failed to tell the people how much has been paid into the federation account from Kogi State that will entitle them to 13 per cent (derivation benefit). Without that, a declaration by the Senate won’t entitle them to anything. There is a big  difference between oil-producing and oil-processing. They may be an oil-processing state but they have not contributed to the revenue of this country from oil. When they do that, they will become an oil-producing state.”

Download our app on Google play store for latest news on politics, entertainment, sports and more. Click the link below https://play.google.com/store/apps/details?id=com.traitnews.android