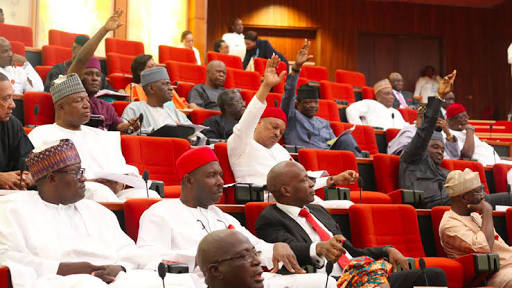 *Rejects Proposal To Include Kano, Plateau

Following the signing of the Northeast Development Commission Bill into law by President Muhammadu Buhari, Senate wants the President to make adequate financial provisions in the 2018 budget for the smooth takeoff of the commission.

The upper legislative chamber also called on donor agencies to continue to support the Northeast through the newly established commission.

Senate resolution follows a motion from Senator Danjuma Goje (Gombe Central), asking it to commend President Muhammadu Buhari for signing the Northeast Development Commission bill and his commitment to tackle the plight of the Northeast region.

The Development Commission Bill was initiated by Senator George Sekibo (Rivers Southeast) through a motion in 2015 and was passed by the National Assembly before assented to by President Muhammadu Buhari late October, 2017.

The establishment of NEDC is a direct response by government to address the widespread devastation inflicted on the zone by Boko Haram Insurgents.

In his contribution, Deputy Senate Prsident, Ike Ekweremadu is delighted with the establishment of the commission, hoping it brings relief in the Northeast.

Senate Deputy Minority Leader, Emmanuel Bwacha welcomes the establishment of the commission, he however cautioned strongly against misappropriation: hoping that those who will manage it would not turn it into conduit pipe.

Senator James Manager (Delta South) congratulates the people of Northeast; hoping that similar gesture would be extended to the Southeast by taking a second look at the Southeast Development Commission Bill pending before it.

Senator Ben Bruce (Bayelsa East) shares similar worry based on what he said has been his experience with similar Niger-Delta Development Commission (NDDC).

The commission enjoyed support from majority of other lawmakers but an additional prayer seeking to amend the Act to include Kano and Plateau States was roundly rejected.

Although Kano and Plateau were not in the epicenter of Boko Haram attacks, the two states suffered significant devastation as a result of Boko Haram terror activities.

Frantic efforts Kano State lawmakers and their counterpart from Plateau to have their states in the commission in the future failed.

Nigerian Newspapers: 8 News you need to read this Saturday