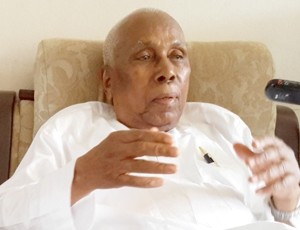 Elder statesman and chairman of President Muhammdu Buhari’s transition committee in 2015, Malam Ahmed Joda has called on the National Assembly to apply the constitution, as the President has been away for over 90 days.

He said: “It gives me sleepless nights, it keeps me thinking, but what worries me most is the seeming lack of seriousness in the debate. I have not seen anybody who is talking about restructuring either for or against who has articulated the way Nigeria should be restructured.

“Everybody is just saying restructure or true federalism but nobody has come to say how we can achieve that.

“When we became independent, we were three regions, in 1963 we created a fourth region called, Midwest; we thought we had solved the problem but no, people said we had to have states so we created 12, they said it was not enough, we created 19, we are now 36 and there are demands for more than 100 currently. At the same time, people are complaining that the centre is too powerful and becoming dictatorial so we must do something.

“If you break Nigeria into 100 pieces, in a situation where 36 states cannot pay their salaries and wages and cannot raise enough income to create developments in their states, you create more problems.”