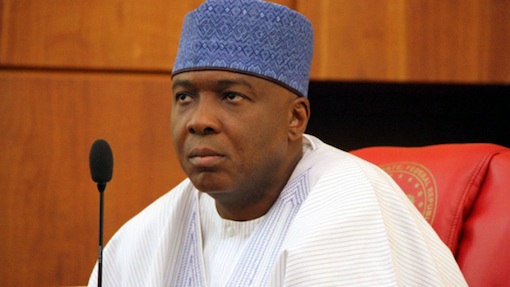 Senate President Bukola Saraki has sacked his director of protocol, head of administration and 96 others to scale down the number of his aides.

Daily Trust gathered that the affected aides have been issued sack letters through the office of the Chief of staff, Hakeem Baba-Ahmed.

It was learnt that with the mass sack, Saraki’s aides have been reduced from over 300 to a little above 200.

The newspaper had exclusively reported in March, 2016, how hundreds of aides engaged by Saraki, the Speaker of the House of Representatives, Yakubu Dogara, the Deputy Senate President, Ike Ekweremadu and Deputy Speaker, Yusuf Lasun weighed down the National Assembly.

He said among those affected were the director of protocol, Arthur Ndiwe and the head of administration, Mrs Folasade Adigun.

It was also gathered that the Special Adviser to Saraki on legal matters, Ibrahim Tukur El-Sudi has also resigned.
Another source in Saraki’s office, who also confirmed the mass sack, said majority of those affected were staff of the National Assembly, who have been on secondment for over a decade.

The source who doesn’t want to be named said others who were affected are those who were redundant and are not ‘adding value’ to the system.