HomeWORLDAFRICAShocking! Mother, Daughter Give Birth For Same Man And At The Same...
WORLDAFRICALIFESTYLE

Shocking! Mother, Daughter Give Birth For Same Man And At The Same Time | Trait News 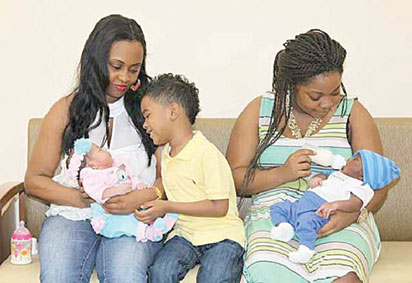 A young mother and her daughter from South Africa got pregnant for the same man and gave birth to their babies just four days apart.

38 year old Mildred Mashego, the mother, learned that her 19-year-old daughter, Patricia Mashego, was also pregnant and that they would be due in the same month. The mother was furious that her daughter got pregnant out of wedlock; however she was even more shocked when she learned who the father of the child was. Mildred was so angry that her daughter was secretly having sex with her boyfriend and was even considering abortion when she found out the truth.

However, now that the children are born the woman has forgiven her daughter for the sake of her grandson. Vincent Malumane, the father of the children, admitted that he was having sex with the mother and the daughter secretly behind the backs of both women.