Nigerian singer and entertainer, Adekunle Temitope popularly known as, Small Doctor, led a huge number of crowd from Agege to Ikeja to protest against police brutality and call for the end of SARS.

The Special Anti-Robbery Squad is a Nigerian Police Force unit under the Force Criminal Investigation and Intelligence Department headed by the Deputy Inspector General of Police Anthony Ogbizi.

For days, Nigerians have been protesting in number against continued police brutality, and activities of SARS officers.

To join the call, Nigerian singer, Small Doctor joined the protest, and he did so with many other fans and residents of Agege.

They walked all the way from Agege Lagos, to Ikeja in their huge numbers to join the protest.

As they arrived the scene of the Lagos EndSARS protest, the crowd erupted in large cheers, as they all promised not to back down till their demands are met. 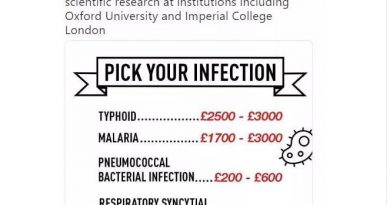 UK students Paid To Be Infected With Dangerous Diseases