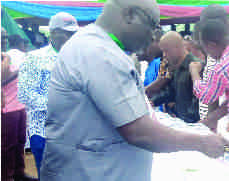 The Bayelsa State chapter of All Progressives Congress (APC) has conducted a peaceful state congress to elect its 36 State Executive Committee (SEC), members, with Barr. Dennis Otiotio emerging state Chairman of the party.

Barr. Otiotio was elected alongside 35 others at the Congress on Saturday at the party Secretariat in Yenagoa, the Bayelsa State capital.

key positions such as the deputy Chairman, state Secretary, Youth Leader, Publicity among others were all filled by core loyalists of the Minister of State for Petroleum Resources, Chief Timipre Sylva.

But the faction of the party led by former Minister of Agriculture and Rural Development, Senator Heineken Lokpobiri, boycotted the exercise, citing the subsisting injunction before a Court of Appeal sitting in Port Harcourt, Rivers State.

However, the Leader of the Party in the State and Minister of State for Petroleum Resources, Chief Timipre Sylva was absent for unexplained reasons.

Chairman of the Bayelsa State APC Congress Committee led six other members of the committee to conduct the congress which was observed by officials of the Independent National Electoral Commission (INEC).

Addressing the delegates, the APC Congress Committee Chairman, DCP Yusuf Aurelius Adejo (rtd), described the conduct of the state congress as a family affair and was peaceful.

Also speaking, the member representing Southern Ijaw Federal Constituency, Hon. Preye Oseke, commended the conduct of the exercise, predicting that the emergence of Barr. Otiotio as the Chairman of the party will lead to the emergence of a new and rejuvenated APC.

According to him, “I want to thank everyone for their peaceful disposition, and all those aspiring to hold executive offices to manage our party. The peaceful nature of the exercise shows progress and we are a progressive party. We will continue to maintain that line in all our activities.

“Being a social democratic party, we believe that Bayelsans love APC, we are coming back strong in 2023 to take over the state”

On the legal war, he said, “We must understand that when an exparte order is given, it has a life span. The National secretariat know that there are no legal battle against us hence they won’t have allowed the congress to hold, we are in line that is why we have a new executive”.

In his brief, Hon. Isreal Sunny-Goli, noted that a peaceful congress of such will make the party stronger, adding that the party is battle ready to even PDP in the next elections in the state.

“And I believe that with the people behind us, the APC will win the 2023 elections. In Bayelsa, we worked hard in 2019 and we won. Now that it later became a PDP state, we will not stop at winning the Governorship election in 2023,” he said.

In his acceptance speech, the newly elected state Chairman of APC, Barr. Dennis Otiotio, thanked the people and accepted the mandate given him to serve, adding that today’s congress is peaceful.

Otiotio stated that what was witnessed today is a sign that APC has come to teach other parties and the PDP how to conduct credible elections. He thanked the delegates for reposing the confidence in him to be chairman, and he won’t disappoint them.