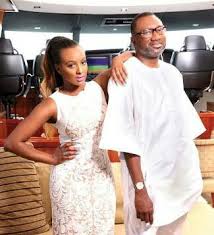 One would think that being the daughter of one of the richest men on the continent would make anybody to be forever happy but that has not always been the case with Femi Otedola’s daughter, DJ Cuppy.

The ever-smiling disc jockey recently revealed that during the early stage of her career, she was not always comfortable with her background because people hardly gave her a chance.

Cuppy said, “There were definitely times that I wished I was not the daughter of Femi Otedola but that was back in the days.

Now, I am very comfortable in my own skin. In the beginning, when I first got into the Nigerian entertainment industry, I felt a lot of artistes and industry people who had not even heard me play were dismissive about me because I am Femi Otedola’s daughter.

They felt that I was entering their space with an advantage over them and they thought it was unfair. But now, I feel that I have paid my dues over the last few years and I have built some great relationships with people in the industry. People have started to respect me especially because I have built a good reputation.

Now, I am happy to say who my father is and I cannot even change who my dad is. I am embracing the fact that I am his daughter and I see it as a blessing. It feels like they used being my father’s child against me. I walk into a room and before I open my mouth, everyone has formed an opinion about me and they are not giving a young woman a chance to even prove herself.”

Comparing herself with her colleague, Davido, who was equally born into an influential family, the disc jockey said that Davido used his family’s wealth to his advantage.

“The difference between Davido and I is that he used it as an advantage early in his career. He said ‘I am OBO, take it or leave it’. But I am not that kind of a person. It was really smart of him because before you can form an opinion about him, he has already told you who he is. He made it work for his brand. He loves the lush life and he is not apologetic for who he is,” DJ Cuppy said.