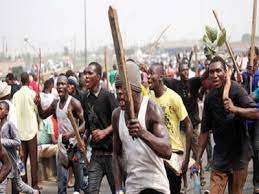 Many Thugs in their Hundreds has invaded All Progressive Congress, APC Secretariat in Enugu state on Tuesday when Bar, Ben Nwoye was briefing the press and forcefully collected TVC and NTA camera respectively.

The TVC reporter and camera man who draged the camera from the thugs before they were overpowered, followed them to a destination where deleted all they recorded.

The reporter, Dele Ajayi lamented how he was manhandled by the thugs, saying “This is terrible. They deleted everything I recorded. If they are having problem, they should resolve it and not fighting the media”.

Earlier, the state chairman of the party, Bar Nwoye has announced the suspension of Hon Eugene Odo, Flavour Eze, Ada Ogbu and El Aja as the resolution of SWC of the party over anti-party activities during ward congress.

Barr. Nwoye disclosed that the suspension was necessary following the report and recommendation of the investigative and disciplinary committee.

“This meeting was to discuss the preliminary report of investigative and disciplinary committee on the disappearance of result sheets during APC Ward Congress in Enugu State.

“Based on the report, the committee made the following findings, that there is high level conspiracy as some of the party leaders hijacked the result sheets through the congress committee chairman, Dr Ijeoma Ariodiogbu, that Hon Eugene Odo, Ada Ogbu, Flavour Eze and Hon El Aja were directly in position of collecting fictitious names, that Eugene Odo, Princess Ada Ogbu and other co-cospirators influenced the chairman to hand over the sensitive materials to them.

“Based on this findings, the committee made some recommended, that Hon Eugene Odo, Flavour Eze, Princes Ada Ogbu and El Aja should be suspended from the party and that the investigation should continue to find out other high placed party members involved.

He disclosed the the investigative and disciplinary committee was put together immediately the party leadership in the state noticed a foul play which was chaired by Chief Anike Nwogu, Dr Oby Aji as secretary and Chief Chuks Adibe as member.

Hear him, “During our investigation, we found out that the sensitive material were disposed to the custody of Hon Eugene Odo who took those materials to South East secretariat of the party and seek the services of those who wrote report for them. According to the report, Princess Ada Ogbu was in charge of collecting fake names from the 77 wards in Enugu East senatorial district, Hon Eugene Odo was vested with responsibility of collecting fake names from 102 wards in Enugu North, the Minister’s PA, Mr Flavour Eze collected fictitious name from Udi and Ezeagu comprising of 40 wards while El Aja collected name from 41 wards from Aninri, Oji River and Awgu”, he said.

Hon Odo when contacted said that Bar, Nwoye has-been suspended this morning and has no right or power to suspend anybody, stressing that Nwoye should be addressed as former Chairman. He said that over 40 members of the party move the motion for his suspension.

Also contacted, Mr Flavour Eze, said that the suspension is baseless, stressing that he voted and monitored the election with his principal, Honourable Minister of Foreign affair, Hon Geoffrey Onyeama.