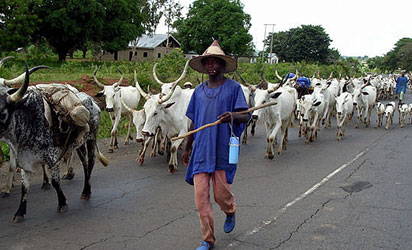 Nsukka: Abbi Community in Uzo-Uwani Local Government Area, Enugu State, is under a state of agitation following the invasion of the area by Fulani herdsmen who unleashed carnage on the people, killing two siblings; a brother and sister apart from razing down about eleven houses and several motorcycles and tricycles.

the attack which took place last Thursday with a numbering of about 30 fulani herdsmen have left two deaths and 19 missing persons in the community as the time of this report, even as several others were also wounded with machetes by the invaders.

The two relations who were killed were identified as Fidelis Okeja, 45, and his sister Mercy, 50. According to eyewitness, Fidelis and Mercy were sitting outside their compound around 6.30pm discussing when suddenly, about 30 masked Fulani herdsmen emerged from nowhere and kill them instantly. They later went ahead and attacked other members of the community with machetes, burnt some houses before retreating into the bush.
A reliable source in the community told TRAITNEWS that the people were taken unawares by the herdsmen, adding that the police and members of the local vigilante group were yet to respond to carnage.