Two Dead, Some Injured At APC Rally In Oyo 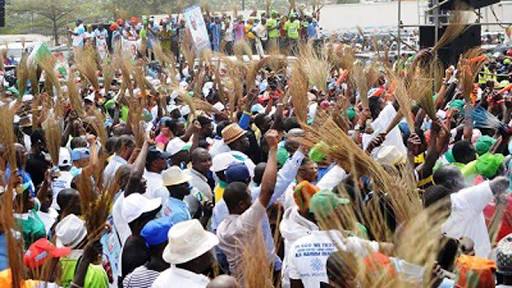 At least two people died in a bloody clash between suspected political hoodlums at an All Progressives’ Congress (APC) campaign rally in Igboora area of Oyo State.

The News Agency of Nigeria (NAN) reports that the incident occurred immediately after the rally held at the old motor park in Igboora on Saturday evening.

NAN reports that the campaign train, led by Governor Abiola Ajimobi, had commenced with a road show from Lanlate through Igboora, Idere, Ayete, Tapa and Igangan before the ralies at Igboora, Eruwa and Omi-Adio.

Some witnesses said, resulted in heated arguments which later led to the free for all.

The incident had since resulted in counter allegations and reactions from political parties and residents.

While the APC accused opposition parties of being behind the mayhem, the People’s Democratic Party (PDP) asked APC to look inwards for the perpetrators.

“Guns were freely displayed by thugs alleged to have been arranged and sponsored by the PDP and some other parties to carry out the dastardly act.

The mayhem eventually cost two lives. One of which is a younger brother to the leader of our party, Alhaji Olayide Abas. We hereby charge security agencies to investigate and unravel the killers of the deceased.