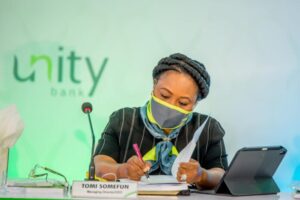 As Unity Bank Plc liquidity crisis gets messier, the bank’s managing director and chief executive officer, Ms. Oluwatomi Somefun, is said to be fighting hard to save her job even as the lender plans to hold its annual general meeting (AGM) on the 1st of July 2021.

Inside sources disclosed that bank’s board led by Aminu Babangida, (son of Ibrahim Babangida) has lost confidence in the leadership of Somefun as she has failed to turn around the fortunes of the bank.

This medium also gathered that the lender’s shareholders have also questioned the capacity of Somefun and thereby called for her sack.

A close look at the books of Unity Bank shows that the lender is in dire need of urgent capitalisation if it must eventually survive the CBN hammer.

Even the bank’s external auditor, KPMG Professional Services, raised a red flag in 2019 and 2020 on the existence of Unity Bank, when it pointed out that the bank’s total liabilities exceeded its total assets by N279 billion and that the lender did not meet the required minimum CAR of 10 per cent for a national bank.

Agusto & Co. had also assigned a “BB-” rating to the bank, meaning that it is junk, which is below investment grade.

KPMG had warned that “a material uncertainty exists that may cast significant doubt about the bank’s ability to continue as a going concern.”

However, the board has expressed strong confidence that it would salvage the situation and get the financial institution back on its feet.

“The bank, therefore, did not meet the minimum capital requirement and the CAR as stipulated by the CBN for a bank with a national banking license which is 10 per cent.

“The directors acknowledge that uncertainty remains over the timing of the recapitalisation of the bank.

“However, the directors [have] reached an advanced stage with both local and multinational investors in the fund mobilisation for the bank,” the results said.

In the last five years, the performance trend of the financial institution has hardly tickled investors and there have been patches of weaknesses here and there, indicating that all is not well with the bank.