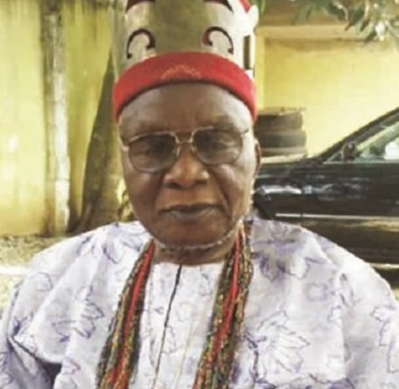 Umuahia Youths under the prongs, Umuahia Youth Movement, have issued a 24-hour ultimatum to Abia state governor, Okezie Ikpeazu, to dethrone the father of the leader of the now-outlawed secessionist group IPOB, Nnamdi Kanu or they would take the laws into their hands by dethroning him, stripping him naked and burning down his palace.

The decision of the youths is in the light of the recent civil unrest witnessed in their community following the clash between IPOB members and the Nigerian Army.

In a letter addressed to the state governor, the youths said they are demanding the monarch’s dethronement because he failed to call his son to order but rather encouraged him in his “madness”. The letter reads:

“With tears and sorrow, the Umuahia Youth Movement respectfully write to request the dethronement of Nnamdi Kanu’s father as a traditional ruler of our clan. It beats our imagination that a man who calls himself a royal father and an elder could not call his son to order but rather encourage him in his madness has have plunged Umuahia city to a great crisis today.

Sir, recall that Umuahia have been the most peaceful capital city in Nigeria to live and do business but just because of one man, we are today facing the wrath of the federal government of Nigeria. Our shops, markets, schools, churches and all banks have been shut down. For the past three days we have been indoors for fear of been attacked by the military just because of one man whose father is our traditional ruler.

Based on the above, we hereby request that he be dethroned within 24 hours or we will take the laws into our hands and dethrone him and even strip him unclad and raze his house. We appeal to every well meaning Nigerian as well to prevail on governor Ikpeazu to as a matter of urgency dethrone Nnamdi Kanu’s father.”

The youths reportedly called for the continued stay of the military’s Operation Python Dance in their community. They alleged that if the soldiers are withdrawn, IPOB members would attack them and rob residents of the community of their belongings.