HomeNEWSPDP crisis: I have what it takes to flog, crush ‘small boys’...
NEWSPOLITICS

PDP crisis: I have what it takes to flog, crush ‘small boys’ – Gov. Wike 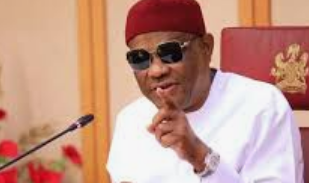 The Rivers State Governor, Barr. Nyesom Wike says he has what it takes to flog and crush his opponents, whom he described as “small boys.”

Wike made the statement while stressing that he would not leave his political opponents to God but deal with them himself.

He said: “God has given me what it takes to crush these people, for me to crush my enemies.

“I have the capacity to flog these small boys.”

Wike has been aggrieved with leaders of the Peoples Democratic Party, PDP, since the party’s presidential election.

The governor is aggrieved that the party’s presidential candidate, Atiku Abubakar ignored him and picked Governor Ifeanyi Okowa as his running mate.