HomePOLITICSWoman Who gave Trump Middle Finger Gets Over $100,000 From The Public...
POLITICSWORLDUSA

Woman Who gave Trump Middle Finger Gets Over $100,000 From The Public | Trait News 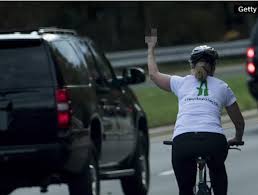 Julie Briskman, a 50-year-old mother-of-two who lost her job earlier this month for sticking a middle finger up at Donald Trump’s motorcade has been showered with donations of over $100,000 after a GoFundMe account was created to support her.

the said woman went viral when newsmen captured her on a bike giving the President’s motorcade the middle finger on October 28 as the president left Trump National Golf Course in Sterling, Virginia. Three days later, the marketing executive was fired by her company, government contractor Akima.

After she was fired, Rob Mello, who was inspired by what Juli did, set up a GoFundMe account to raise money for her.