Olagunsoye Oyinlola, Former governor of Osun State, has reacted to a statement made by Chief Adebayo Alao Akala, Former of Oyo State, stating that the ownership of Ladoke Akintola University of Technology (LAUTECH) had been given to Oyo State as completely false.

Akala was quoted over the weekend claiming to have secured the sole ownership of the university from the Oyinlola government before he left office in 2010, as he blamed his successor for alleged failure to follow the trend.

However, Oyinlola, in a swift reaction on Sunday faulted Akala on the said statement, adding that the former Oyo State government could have either forgotten so soon, or being mischievous.

He explained that Osun State government, during his tenure pursued the affirmation of joint ownership of LAUTECH by the two states up till Supreme Court .

“That case was still on by the time I exited government in November 2010. Indeed, the Supreme Court in March 2012 in a judgment delivered by the then Chief Justice of Nigeria, Justice Dahiru Musdapher, upheld the joint ownership of LAUTECH by the two states.

“While the case was on, and two months before I left government, and in order to protect the interests of the suffering students and workers of the university, the National Universities Commission (NUC) set up a seven- man committee headed by Prof. Chiedu Mafiana, a Director, at the NUC, to oversee the affairs of the university due to certain unilateral actions taken by the Oyo state government which were the subjects of the case at the Supreme Court.

” The committee was in charge of the school by the time I left office in November 2010.

“It goes without saying that my government, which went to the Supreme Court could not have at the same time ceded the subject of dispute (LAUTECH) to the defendants in the case.

“There was no ceding of the institution to Oyo state. Perhaps I should also say that Osun state under me did not default once in meeting its financial obligations to the university throughout our years in government despite the crisis ignited by the attempt by Oyo state to forcibly chase Osun state out of the joint ownership.

“This effort, coupled with the dedication of staff of the school, made LAUTECH the best state university in Nigeria and its teaching hospital topmost in terms of efficiency,” Oyinlola asserted.

The retired General therefore called for total commitment on the part of the two states to put a stop to the lingering crisis in the institution, which has become a source of worry for students and parents alike. 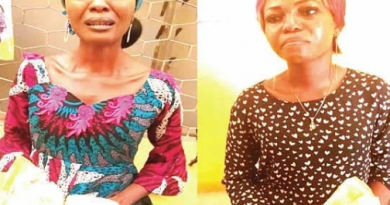 Sisters Arrested For Attempting To Smuggle Drugs Into Kuje Prison