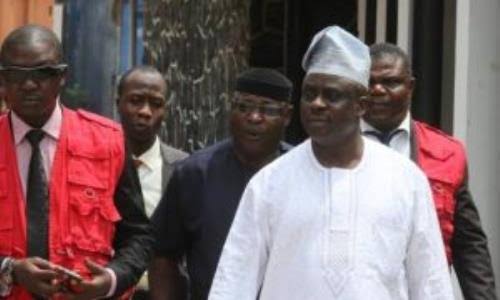 Amosu is standing trial alongside Air Vice Marshall Jacobs Adigun,  a former Chief of Accounts and Budgeting and Air Commodore Gbadebo Owodunni,  a former Director of Finance and Budget, on an amended 13-count charge bordering on conspiracy and conversion to personal use of the sum of N21bn belonging to the Nigeria Air Force, NAF.

Owobo, an investigator with the Economic and Financial Crimes Commission, EFCC, while being led in evidence by the prosecuting counsel, Rotimi Oyedepo, explained his findings regarding the statement of account of the NAF special emergency operations, as contained in Exhibit A3.

“NIMASA paid in a sum of N3,000,000,000 (Three Billion Naira) in 2014. The statement of account showed that the money was transferred to five different companies, namely: Rites Option Oil and Gas, Juda Oil and Gas, Delfina Oil and Gas, Mcallam Oil and Gas, Trapezites Bureau De Change Limited and Lebol Oil and Gas.”

When asked about his findings regarding the companies that received the money, the witness further told the court that “When the statements of accounts for the companies were investigated, we found out that one Adedeji Adelakun owns Rite Option Oil and Gas.

“When he was interviewed, he said it was a Bureau De Change company. He also said that it was opened as an oil and gas company, so as to get reduced charges on cost of transactions.”